Still Don't Know What I Was Waiting For 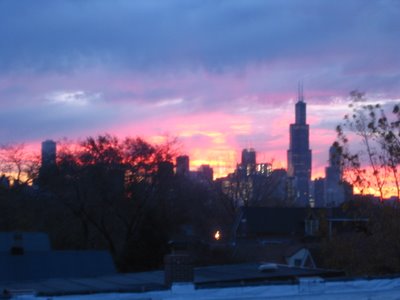 In The Sandman: The Wake the character Lucien (chief librarian in The Dreaming) is asked why Morpheus let himself die. Lucien responds, "Sometimes, perhaps, one must change or die. And in the end, there were, perhaps, limits to how much he could let himself change."

I have been thinking about that phrase a lot lately as events have transpired to cause me to realize that I am terrified of change.

This may come as a bit of a surprise when one considers that about two and a half years ago, Fred and I signed on for a life-changing experience by conceiving a child. I watched the shape of my body change as he grew inside of me and now I watch the shape of my days change as he grows outside of me. However, with the exception of the choice to conceive, having a child is a passive experience when it comes to change; the change happens to you and you react to it, as opposed to actively seeking out the change. When it comes to choices, I tend to avoid even having to put myself into Robert Frost's shoes by just not venturing forward. Sure, sometimes the roads find me, but then, the change is out of my hands, it will happen whether I will it to or not.

I do not seek out change and, in some ways, my life feels like it is preserved in amber. I have lived in the city of my birth for most of my life. I have lived in the same house for nine years and we have made our one bedroom loft work despite the fact that we have a rapidly growing toddler in a space which has few doors and walls. I have not had a "real" job in five years and when I did, I stayed in those jobs for long periods of times, long after it was time for me to move on, because I would tell myself that leaving required too much effort on my part. I am plagued by my own inertia. I approach every new opportunity with fear and trepidation which often overshadows any hope and excitement I should be feeling. I meet other mothers and make noises about getting together for play dates, but never actually get around to responding to their overtures of friendship.

As I type this, it sounds like I am lazy. Or anti-social. I don't quite think that is my problem however. When I really look at myself, I think I would describe myself as someone who takes a long time to adjust and feel comfortable in a new situation. I went to college in Portland and at no point did it ever seem like home. I have spent nine years in this apartment, but it took us years to get this place organized in such a way that we were happy and comfortable. I really prefer sleeping in my own bed and one of the perks of being a 30+ married mother is that no one really expects me to sleep anywhere else.

But time marches on and change is inevitable. We all have to change eventually and maybe just jumping in headfirst is the better course of action. The water will still be every bit as cold, but the more wet you are, the quicker it will be for your body to adjust to the temperature. Easing one's self into the pool just prolongs the inevitable and it never makes that final plunge of shoulders and head any more bearable. Sometimes one has to act in order to control one's fate. If the choices are change or die, it would seem that life is the way to go.
Email Post

Anonymous said…
This is a very well written post. I loved it. I especially loved the analogy of jumping in the pool, versus gradually getting in. I am that Mom who has good intentions but never makes the playdates. It was easy to relate.

Anonymous said…
Funny, I've always thought of you as someone who really weathers change well... certainly you've taken on motherhood with grace and aplomb. In any case some things don't change - for instance the fact that your old gang will always be here with you, regardless of how often or how comfortably we all move.
10:24 AM, July 26, 2006

Carrien said…
It too suffer from my own inertia. My husband thrives on change. I find my panicked attempts to adjust to the changes he brings, (I have not lived in one place longer than two years, and the average is about 9 months, since we married.) cause my own inertia to become more fully intrenched as a reaction and I find I"m stagnating in my slow ability to adapt to the every day, I lose what I need to invest in my own growth.
Great post.
10:52 PM, August 01, 2006

Anonymous said…
Congrats on your PP. I have good intentions and shame on me, I complain about the lack of available and interesting moms when I don't do anything about it.

Anonymous said…
I find that my inertia is the worst when i'm weighing my own desires against the real or imagined desires of others. Being a flake is bad right? Changing your mind is an awful thing?
4:50 PM, August 04, 2006