Some More Thoughts On What We Just Did

I have been bursting into tears on and off since Tuesday night. While some of this is probably a result of exhaustion and a release of all the tension which had built up inside of me this past year, a lot of this is also due to happiness, pride, and astonishment that someone who shares many of my values and who represents all of us has become president. For the first time in years, I feel hope for our country's future.

However, I am not sure I can grasp the enormity of what has happened and I feel at a loss for words, so I thought I would share what some smart and powerful women of color had to say about Barack Obama winning the presidency.

"You just know that Americans are not going to be satisfied until they really do form that more perfect union."-Condoleeza Rice

Finally (and most importantly) my mom sent out the following email Tuesday night (no video, so you just get a picture of us from my wedding, mom is on the right) 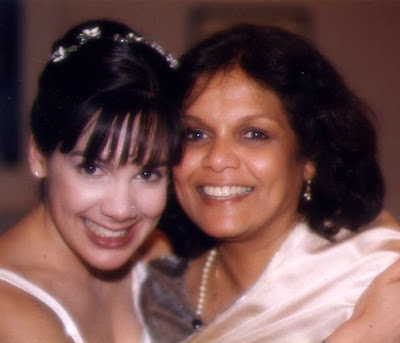 In 1963, when I first arrived in the US, I watched Martin Luther King lead the March on Washington for civil rights for the American blacks.

In 1967, when I got married, my marriage was illegal in 16 states in this country.

My children are products of an American father and a Tanzanian mother. And both of them did their part and volunteered to elect a person, whose father was Kenyan and whose mother was American, to be our next president.

Even my little, soon to be four years old, grandson, was up at 6 this morning insisting he accompany his dad to the polling booth. He stood patiently in line for over an hour with his dad and then watched as his dad "colored some boxes".

We wish the new President elect the best and hope we see a world where peace and prosperity is once again restored.

It's a great day in the US!! God bless America.
Email Post
Labels: Culture Politics

Monroe Anderson said…
Alison, you and Jo both contributed mightily to the cause. It was because of millions of Americans like you that the change has come.
8:23 PM, November 06, 2008