The Fire No One Can Forget

"It wasn't any old fire...it broke up people's lives for eternity."--Captain Joe Murray (one of the first firefighters to arrive at the Our Lady of the Angels school fire. Listen to his story here)

Today is the fiftieth anniversary of the Our Lady of the Angels School fire.

As someone who grew up in Chicago, I have always known about the fire, and yet, it was always shrouded in mystery. It is hard to believe it happened within a generation of my birth. Perhaps I wasn't paying attention. Children and teenagers are inherently self-centered and something which happened decades ago may as well have happened eons ago. Perhaps I considered the fire to be history and something like that couldn't happen to me because society had progressed, why listen to the stories when they would only make me sad? Perhaps I am only now capable of grasping the tragedy because I am capable of viewing it through the prism of parenthood.

However, I can't quite chalk up the mystery that was the fire to my own inability to see. As I said, I always knew of the fire, and I do recall thinking about it as a child, wondering how it happened. It was something that was referred to, but then never discussed in depth. I only see now that the reason so many chose not to talk about it was because the pain ran so deep, the damage so great, the wound hadn't healed. Maybe the wound won't heal until all the parents and firefighters who couldn't save children and had to watch them die are gone. Maybe the wound won't heal until the West Side of Chicago has completely gentrified, rebounded from the exodus of all the families who couldn't stay in the neighborhood where so much pain had occurred. Maybe the wound won't heal until everybody has a chance to tell their story. Maybe there are certain tragedies which tear a wound so great in our collective consciousness that it will never heal, because healing implies a certain amount of forgetting and do we really want to forget about a school fire which killed 92 students and 3 nuns? 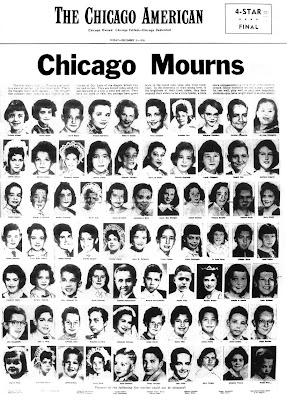