Remembering Someone I Didn't Know 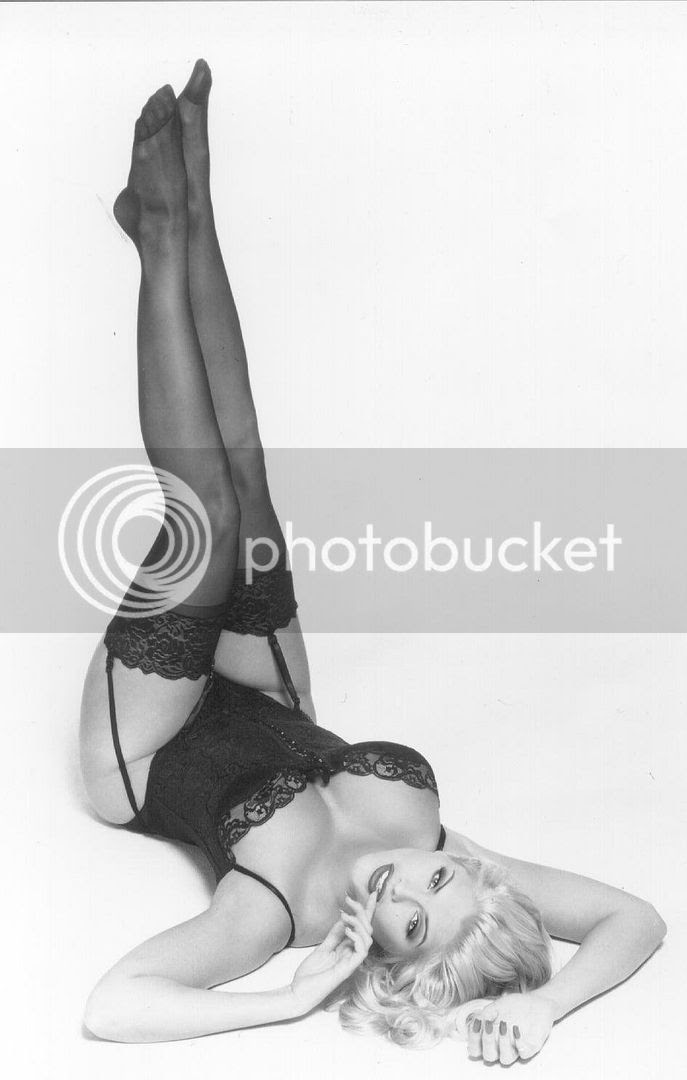 I find the degree to which I am moved by the death of Anna Nicole Smith to be surprising. I hadn't really thought much about her when she was alive. I knew about her, even before her reality TV show, in the way that we know about celebrities, and I could voice an opinion about her if asked to do so, but that was it.

I remember her Guess ads, but more because Guess' advertising campaign was criticised for being too risque.

I remember reading a blurb in Newsweek about how she claimed she had never had her breasts enlarged, that they grew to the out of proportion to the rest of her body size they were during pregnancy. I remember how the tone of the Newsweek blurb suggested she was lying. I had no experience with pregnancy at the time, so I believed Newsweek.

I remember the lawsuit over her dead husband's billions. I remember thinking that the suggestion she was a gold digger who only married him for his money was predicated on the belief that no beautiful girl in her twenties would ever be attracted to an old man for anything but money. It seemed equally unlikely, to me, that a person who lived a full and rich life would be attracted to a young girl for anything but her beauty. So either an unlikely thing happened and they both found love or they were both using one another. Either way, I thought she deserved the money.

I remember when my sister-in-law Karen gave birth to her first child, she mentioned names she liked and the name "Anna Nicole" was one of them. I remember looking at her lying in the hospital bed and saying, "That probably isn't a good idea." Karen smiled and I knew she was thinking that she didn't want her daughter posing in Playboy someday, so yeah, not a great idea.

I remember her reality television show, though I barely watched an episode. She seemed so vacant and seemd to lack many cognitive abilities most of us take for granted. It seemed like a bit of a side show, and while I thought it was grotesque of the circus to make money off of her, I thought it was great that she was making money off of herself. Especially since she had gained all that weight and the prospect of a modelling career seemed remote.

I remember the TrimSpa ads. Her weight loss was shocking. Inspiring in ways, enviable in others.

I remember that her son died within days of the birth of her daughter. I couldn't imagine the confusion and pain she must have felt. She wasn't a celebrity, she wasn't a model, she was another mother in pain. (By this time, I had gone through pregnancy and come out the other end. My breasts had swelled over three cup sizes during pregnancy. Though they had reduced in size from the ginormousity they achieved in the first month of breastfeeding, they still had not gone back to their pre-pregnancy size, they were out of proportion to the rest of my body, destroying the line of most clothes. I'm sure anyone who saw before and after photos of me might suspect I had work done.)

And now she is dead.

There are people who are saying that she actively sought her celebrity so it is alright to pass judgment on her life. They bring up how she grew up poor, how she once was a stripper, how she posed for Playboy, the reality television show and her behavior on it, and all this is their way of saying she doesn't deserve the sympathy or respect you would expect someone to show for the recently deceased. As if her life was somehow less worthy because she made choices which, perhaps, we would not have made. She was a beautiful model, but since she posed in Playboy, Anna Nicole Smith was called a tramp, whereas Tyra Banks and Heidi Klum posed for Victoria's Secret, so they are called moguls. And she wasn't smart enough, or didn't have the talent, to make her selfploitation seem like a smart career choice (like Jenny McCarthy, for example). The thing is, Jenny and Tyra and Heidi all have things which Anna Nicole didn't appear to have: among other things, families that cared about them and saw that they received an education. I didn't know her, but it seems like the former Vickie Lynn Hogan didn't have anything but her face and her body to fall back on. But instead of feeling sympathy for her and wondering how we can help other girls, people just sneer and feel superior. And those are just mainstream media outlets.

Yes, Anna Nicole courted fame, she behaved outrageously in public, and, at times, seemed to lead a bizarre lifestyle. But she wasn't alone in this (hey, look at all the people who try to get on reality TV shows, and all the young people willing to do ANYTHING to catch a break in Hollywood). She was blessed with incredible physical beauty and there were all sorts of people willing to exploit it (the strip club operators, Hugh Hefner, the soft core directors, E!, all the tabloids, TrimSpa), but she is chastised for being a fame monger. It's as if she is less of a victim of circumstance because she tried to make some money and achieve some fame, instead of just letting the professional exploiters suck her dry and leave her with nothing. She seemed to have a really sad life. It is easy to discount someone as a train wreck, it is harder to understand how and why they got there. Because she was so beautiful, and because she courted fame, and because she was not so bright, I think quite a few people felt she was fair game for ridicule and scorn--maybe some people feel she deserved to be the object of derision, or that she was so lovely that she deserved to be taken down a few pegs, or that she was the sign of the breakdown of Western Civilization. It just seems so petty and shallow.

A lot of what I have said about her being beautiful and not so bright and courting fame and having an unhappy life could be said about her idol, Marilyn Monroe (a woman she wanted to be like her entire life), but it could also be said about Princess Diana. However, because Anna Nicole Smith was a stripper and posed in Playboy and lacked "class" or "talent" (which I am putting in quotes because those are difficult qualities to identify and isn't it smug of us all to try?), she is somehow not as worthy of respect as Marilyn or Diana or anyone else who lived fast and died young. In death, as in life, there are so many people who refuse to see her as a human being (a flawed, troubled, perhaps not terribly admirable human being, but a human being) and just want to make a buck off her body.

For some people, extreme beauty is a curse. Marilyn Monroe was abused sexually as a child and was bounced from foster home to foster home because she was too pretty and made women feel threatened. We will never know what happened to Anna Nicole Smith to make her life turn out the way it did. However, I will always see her as a victim of the people who damaged her when she was young and our culture which fed off her carcass when she grew up.
Email Post
Labels: Anna Nicole Smith Beauty Celebrity Culture

D said…
Awesome post. I was saddened by her passing as well, simply because I feel she really got a raw deal in life - So blessed yet beat down at every turn. Your take on her life rings true.
9:52 AM, February 10, 2007

Judy said…
Thank you for writing this.

I've been having a hard time with her death too, and I'm not sure why. She was beautiful, and I couldn't help but like her.

And I agree with almost everything you said, especially about her billionaire marriage. Either they really loved each other, or they were both knowingly using each other, and either way, she deserved the money (and I don't think she did anything wrong).

Anonymous said…
Thank you for writing this - I thought I was going a little insane to feel so incredibly sorry for this woman. All the men coming out saying that her baby was their child - it's crazy. She was clearly so confused and taken advantage of by anyone who had the means to do so. The fact that she had a son who loved her meant something to me a few months ago, and I was sad then at her loss. The whole thing is just tragic.
2:40 PM, February 12, 2007

Anonymous said…
Thank You for writing this ~*~
It was so kind of you to reflect in the way that you did, as many have been so ridiculous in other posts that I've read.
I liked Anna Nicole Smith, amybe because she was a bit like me (or I her, though I'm older), I have been a fan of Marilyn Monroe since I was a child.
Again ~*~ Thank you
5:22 PM, February 17, 2007