My mom always told me I had imaginary friends when I was young. Their names were Stephen and Naneena. I do not remember them at all (they don't call, they don't write.) When I was in high school, there were a number of people who I befriended over the telephone--yes, we had met in real life once or twice, but it wasn't until we actually had a phone conversation (or twelve) that we became friends. While I definitely have become more introverted with age, I have always been far more charming (or rather more consistently charming) via technological device.

This online world, of blogs and message boards, creates a series of connections. It grants us all the illusion of intimacy. I know people's hopes and dreams and yet I wouldn't be able to pick them out of a lineup. I know details about people's sex lives and bodily functions yet I have no idea how they take their coffee (or even if they take coffee). For all I know, all these people I encounter electronically and with whom I have meaningful interactions may not even exist.

As I have said before, I am wary of crossing boundaries. I have read too many fantasy novels and have too active an imagination. In works of fiction (like the Alan Ayckbourn play Invisible Friends), when one meets an imaginary friend, it usually ends in disaster. The boundaries exist for a reason and we should not dwell long in the border regions. So I remain inside a shell and rarely extend myself.

But, I wonder, isn't all that just a bunch of pseudo-intellectual drivel and psychobabble? Isn't that just my anti-social nature trying to keep me from reaching out and have meaningful interactions with others? Why am I letting my fear do the talking? What is the worst that could happen? What is so great about this shell, anyway?

So it was with all of these thoughts swirling through my consciousness, along with the far more immediate thoughts like, "Will she like me?" and "Will I like her?" that I drove up to the W hotel and picked up Karrie this afternoon.

Of course, I wanted to impress her, so I took her to my favorite book and record stores. We ate at a hipster cafe. She came over to my house and I made her coffee (and now I know how she takes it). She met my cat, husband, and child (in that order). I showed her a closet full of black dresses. There were many threads of conversations which were inadvertently dropped and now I find myself wishing I had remembered to pick them up again. There were many questions I wanted to ask which I forgot to ask. In short, six hours was not nearly enough time and Karrie must visit again (or we will be forced to visit her).

And, for those of you who are interested, I took pictures. 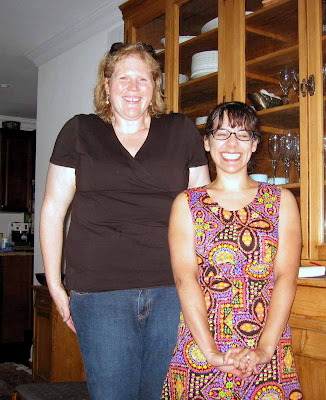 Yes, Karrie is very tall and I am not. And she is very fair and I am dark. We could hit the road as a comedy act.

Alas, Karrie failed to get any pictures of me as she is still learning how to use all the special features of the iPhone (!) and the lighting in my house wasn't the best for picture taking. But that just means she has to visit again.
Email Post
Labels: blogging

karrie said…
I saw this on the train, but could not reply with my phone. I just got in-- 120 ish in the morning on Tuesday (long delays)--but wanted to thank you for being such a great host. I had a wonderful time on Sunday wandering around, and meeting Julian and Fred, and yes, we definitely need to get together again. :)

Abby said…
Karrie and her boobs....sigh.

Meeting people that you "know" online is different. But it turns out that a lot of those people are more real online so you know them better than people in real life. Then you can sit and talk for hours with no issues. Who knew?

Anonymous said…
It's good to find out how the imaginaries take their coffee. Online only can make you twitchy.
9:22 AM, August 13, 2007