The Girl With The Dragon Tattoo

Note: This is not a book review, it is just my attempt to distill random thoughts which have come up after reading this book.
Every time I think about the title of this book, I start to sing it to the tune of "The Boy With The Thorn In His Side."*
A year ago, my cousin was told that the woman he was getting very serious about (to whom he is now married) was all wrong for him. The friend (and I use that term lightly) who told him this finished her critique with the observation that if the girlfriend is supposed to be so smart, "How come she has read the books I have?" As you can imagine, this has led to a lot of snarking and giggling on our parts, with us pointing out to one another that reading The DaVinci Code is not an indicator of one's intelligence, unless The DaVinci Code is the only thing you have read. I can't imagine a man questioning the intelligence of another man because of his recreational reading. Because it is such an odd thing to pick on someone over, I am almost inclined to chalk this up to the frenemy nature of the woman in question, but I find myself reconsidering the insult in light of this interview with Jennifer Weiner and Jodi Picoult regarding their charges of gender bias and literary snobbery at the New York Times with regards to the books they review and champion. Are women, who do read fiction of all kinds in greater numbers than men, so insecure about our intelligence and the books which are marketed to us and us alone that we can't accept that smart people also read dumb books, even when those dumb books are so aggressively male oriented as Dan Brown's?
I wish I could say that this snobbery was exclusive to frenemies and the New York Times, but I will admit I encounter it among my friends. Almost every cultural phenomenon book I have read has gotten at least one sneer when I mentioned I was reading it by someone who had not read the book. While I can definitely understand someone who had read Twilight hating it, I can't understand what anyone who has not read a book has against it except that it is popular. And popularity breeds contempt. 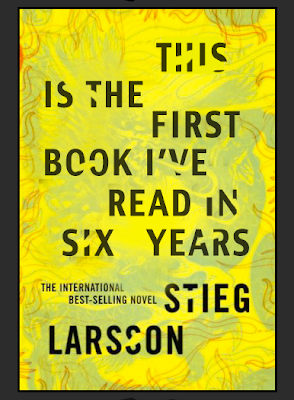 We don't exist in a vacuum. A problem, well not a problem, but a factor in reading a book which is a cultural phenomenon is that it is impossible not to be aware of that fact and to read the book with one eye on the phenomenon. I go through a period of avoidance, intending to be that one person who has not read the book, but then, of course, I am overwhelmed by curiosity and a desire to talk to people about this thing they are so into and give in. I approach the book with a certain hostility, a certain desire to not believe the hype and I find myself either surprised or irritated or confused as I get through the book, depending upon the book. Invariably, no matter how great I find the book to be, I am left wondering why this particular book became the book that everyone has to read in order to be a contributing member of society.
So, all that being said, I found The Girl With The Dragon Tattoo to be gripping. I stayed up all night reading it. I plan to read the next book in the series. I liked the light it shines on sexual abuse against women, especially women who cannot fight back--this was something which never was mentioned in all the chatter about the novel and it shocked me to such a degree that I almost stopped reading when I got to that part of the book (I made Fred tell me that things got less awful before I would continue). I don't think it is a spoiler to mention this and I do have to wonder why it never came up. Do people find it too awkward or do people not care that much about the sexual abuse of imaginary women as much as an imaginary mystery?
*I started to write a Weird Al Yankovic-esque song, but then I realized that A LOT of the original Smith's song would apply to Lisbeth Salander, so you can just go read the lyrics and make the appropriate adjustments where you see fit.
Email Post
Labels: Books music

ooinla said…
That's a solid point. The original Swedish title of the book is Men Who Hate Women. And the Swedish film version is clearly focused on that aspect of the story. But in America a girl with a dragon tattoo is sexy enough (and men who hate women are just too icky) to sell books, I guess.
11:49 AM, August 26, 2010

alimum said…
A book titled Men Who Hate Women would never have sold in America. No matter how thrilling and tightly woven the plot.
4:02 PM, August 26, 2010