For nearly 18 years, this is what I saw in the morning. 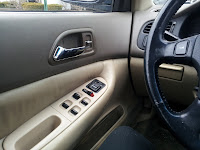 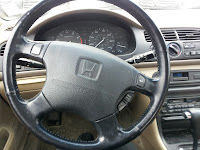 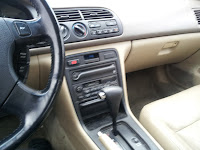 At least, it is what I saw on the mornings when I drove.

For years, people asked when I planned to get a new car. "Never," I would tell them. "This car will be pried from my cold dead hands," I would say, and then, reconsidering what I was implying, "I mean, I expect it to die in the garage, peacefully, in its sleep." Of course, I said that when it was in great condition, when the people doing the asking were the guys at the Honda dealership, begging me to sell it to them. I ignored the scrapes and scratches, the dents and rust, because it still looked super luxe after a car wash in spite of it all, at least it did to me. However, over the course of the past year, all the previous years seemed to make themselves known. The mechanics at the dealership were no longer asking for right of first refusal, they were asking how much money I realistically wanted to put into the car for "unnecessary" repairs.

We hadn't expected it to happen so quickly. We just thought we were going to test drive some cars and look at a used car that was crazy low priced, but we never planned to part with our car there and then. I told people that there was no way we were buying a car on Saturday and they smirked at my naivete. We had never been in a car dealership before and had no idea what we were getting ourselves into. 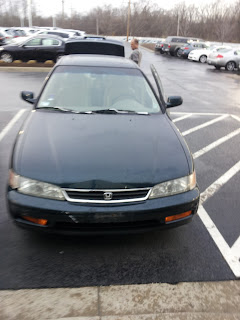 So, as it turns out, we gave up the car before it gave up on us. Put that way, I feel incredibly disloyal. However, it was a decision had to make, if not on Saturday then someday, and it was good to let it go while it still had some life left in it. We hope it will make someone else extremely happy.
Email Post
Labels: Memory Passage of Time