There Is Power In A Union- Take 2

Second semester of freshman year, I took a history class called Culture and Society in Twentieth Century America. It was taught by a professor who did not receive tenure at my school, so as it turned out, I was lucky to take the class not only because I was a freshman taking an upper level history course, but because he left after that semester to teach at a school which did offer him tenure (alas, the cruelty of academia). But really, I was lucky because it was an amazing class which continues to influence how I understand the world. Had this professor stayed at Reed, I am fairly sure I would have ditched my interest in Japanese history and written a thesis in American studies. Maybe (remember, it was my interest in Japanese theatre which led me to Japanese history. It is possible my trajectory would have remained the same. Or maybe I would have stayed in theatre).

At one point in the class, he asked us how many of us had a parent a trade union. I only remember two people (in a class of 30) raising their hands and one of them was an exchange student from England. It was a powerful illustration of not only who ends up at expensive private schools in America, but the state of unions at the end of the last century. And it feels like things have only gotten worse since then.

I mention this because it is something I think about in relation to Julian. Despite being a child of the "professional class", despite his privilege, he will be able to raise his hand and say, "yes, my mom is a proud union member." He also will be able to say that his first concert was Billy Bragg when he was seven (though he grumbled and slept through it). 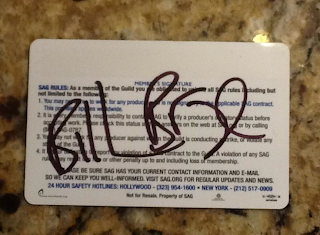 So, yeah, I was really excited that Billy Bragg signed my union card!