Sadly, not at the same time. I would get so much more done if Julian would allow me to knit while he nursed.

Is it my imagination or is everyone knitting these days? It seems so strange to me, who has been knitting since childhood, to see the levels of obsession to which knitting is driving some people. Of course, some people swear that everyone is breastfeeding and this isn't the case (just look at the CDC stats.) I would venture to guess that the same demographic of women who are knitting are also breastfeeding and the fact that I think everyone is doing either says a lot about me and the socio-economic cohort to which I belong.

But there is, in my mind, a strange similarity between knitting and breastfeeding. At least in terms of the time it takes to get it right and to do it well. But everyone assumes knitting is so hard and breastfeeding is so easy when, in my experience, the opposite is the case. Ok, maybe knitting isn't easy, but the consequences aren't nearly so dire if you fail. (Though, of course, we live in an era of formula feeding, so there are, thankfully, no longer dire consequences if one fails to succesfully breastfeed.) Knitting and breastfeeding have a convergence for me in that they both are things which I do, and which I find myself talking a lot about lately, but which have become part of my identity to such a degree that it doesn't seem important; I go out and take some knitting with me to keep my hands busy. Julian starts to tug on the neckline of my shirt (because he hasn't yet learned to be polite nor has he learned patience) and I discreetly lift my shirt. It isn't that either is private, per se (though I am trying to get Julian to nurse only in the privacy of homes as I really don't want to be nursing a 15 month old active toddler in front of strangers.) Rather, it almost feels like I am bragging if I talk too much about my accomplishments in these areas.

So, here it is. I have a great baby who has never had an ear infection and I have never encountered a sweater I couldn't knit. And because a picture is worth a thousand words, here are ones of him nursing and a hat I designed. 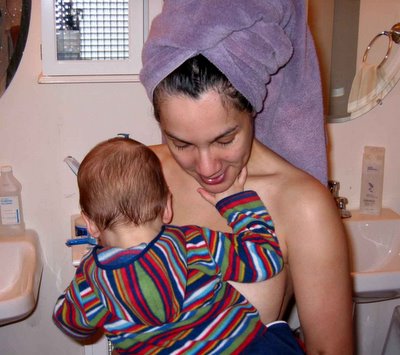 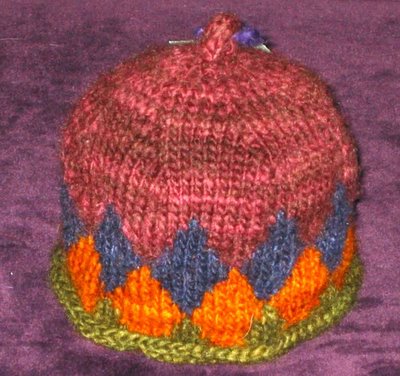 Wiz Knitter said…
I like the comment about spider mommies. I wil have to pass this on to some other knitting and breastfeeding friends for contemplation.

I do know from experience that knitting is a very appropriate activity to engage in while a friend is breastfeeding in front of you. You always have somewhere to put your eyes, whereas otherwise you feel a little odd for staring, even though breastfeeding is totally fascinating and hard not to stare at.
3:02 PM, February 27, 2006

Anonymous said…
Two things at once: I don't think I knit AND nursed at the same time. Quite a feat IMHO. I'm just not that coordinated and between the two, I'm pretty sure which would get accidentally dropped on its head.