For the five year old girl in all of us.

While I knew such websites as glittermaker and bannermaker existed, I never visited any of them. I can see how they might be very addictive. It would be so easy to get sucked in and, before I knew it, my whole blog would be covered in banners.

This newfound fascination with the banner makers and glittermakers and blinkie makers is due to a discussion on one of the message boards on which I participate. The discussion (which was locked) centered around what one thinks of blinkies and banners in signatures. While I love playing with graphics and tend to prefer images to text, I find all that graphic clutter to be annoying when I encounter it on a message board. I am even sortof irritated by it looking at what I posted in this post. It doesn't really say anything about me, except that I like purple and pink and glitter. What amazed me was how irate some of the blinkie lovers got that anyone would judge them negatively based on blinkies. As their whole argument for blinkies was that they wanted to tell the world something about themselves and (usually) their parenting philosophy, I would expect they would know that some people would make negative as well as positive judgments. I guess what ticked them off is the fact that someone might judge them based on the blinkies alone.

The way I see blinkies, avatars, blog templates, etc. is that they function as a form of clothing for us here in cyberspace. How we dress tells everyone something about us. Of course, people look upon our clothing make judgments, ones we can expect and ones we can't, based on their own preferences and experiences.

Another question surrounding this topic is one of what we want to reflect of ourselves through our cyberselves. I want my cyber identity to match my real life identity as closely as possible. I imagine that this is the case for most people (though I think there is a certain amount of gilding which occurs, consciously putting our best foot forward so we appear somewhat smarter, more talented, prettier, thinner, etc. Only posting flattering pictures of ourselves, for example, or using spellcheck.) But am I really an accurate judge of myself? Is anyone?

Years ago, when I took acting classes, I would befriend the people in the class who I felt were the most talented and most interesting (the two often going hand in hand.) I would avoid those I found to be boring and talentless. And I noticed that the people who I discounted tended to band together, just as the people I sought out seemed to attach themselves to me. But I was always a little hesitent to call myself a good actor, because it seemed arrogant and what if I were terribly wrong (I'll admit, my lack of success as an actor leads me to question my abilities on an hourly basis). Once, I was having a drink after class with a classmate and made a comment about hoping I was a good actress and she said to me, "Alison, you know you are up there." And I thanked her and told her I thought she rocked as well. But then we started talking about the people in class who we considered hopeless (yes, actors are terrible people) and I said, "But they think they are the talented ones and that we are the bad actors." And it is true. We tend to find people like ourselves, and then judge people in relation to ourselves and our friends, generally placing ourselves close to the top of the pile. So we are the good actors and they are the bad ones and vice versa. Though perhaps we are using different criteria when choosing associates. I mean, we never sat around saying we were the most attractive or the best dressed, and while a certain baseline level of presentability was important, that didn't factor too much in my desire to befriend another. So maybe the "bad" actors were sitting around saying "we are so much hotter than they are."

Of course, I think I have a pretty excellent wardrobe and I am way cute. But, as I said, who am I to judge? How accurate is the reflection I see in the mirror? How much of the reflection do I actually see and how much of my internal vision am I superimposing over the image? 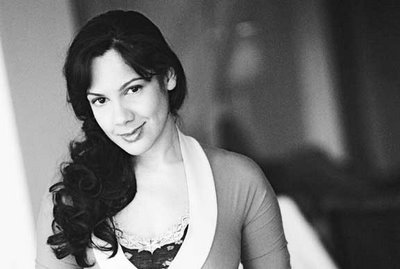 You know I can't look like this every day. But in my mind, I tell myself I do.
Email Post

Tommie said…
Why isn't your banner showing up and why did the glittermaker sig die? I had to go back and do mine over. I couldn't find anything on the site to suggest they might expire. I'm a 62 year old child and I don't like disappointment!
5:21 AM, June 07, 2006