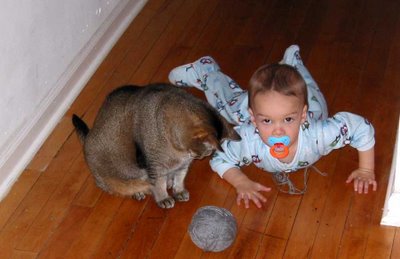 This will come as no surprise to anyone who has watched Julian interact with Simon (or seen the photos.) Julian seems to believe that the best way to show his great affection for his cat is to literally smother him with love. It is funny, but also disturbing as I can't imagine Simon is enjoying the experience of having a 24 pound toddler lying on top of him. 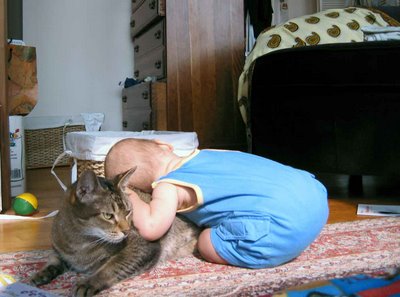 This love extends beyond Simon. I have watched him chase Sophie around my parents' house, hoping to grab her and hug her, but she is much more cautious (or maybe that shoud read smarter) than Simon and has eluded his grasp (and thus, I have no photos of Julian smothering Sophie with his love.)

Julian has also shown an interest in Kristen's cats, cats he sees in windows, and the occasional stray cat we pass on the street.

But while I knew Julian adored the cats he sees, the corporeal cats he encounters in daily life, I had no idea that this love extended to the abstract, that the mere idea of cats should set his heart aflutter. Until now.

The other day, while Julian slept, I was posting on a message board (the two hours during the day during which he sleeps are my time to post to my blog and get some writing done, so of course, I spend most of it procrastinating by reading email and goffing around on the internet.) Julian woke up as I was on the last sentence, so I went and collected him, then I brought him back to the computer, where he sat on my lap as I hit "post."

I checked to see if my post actually posted. Now my avatar on this particular site is a close up of the Hello Kitty sweater I knit a few years ago. Julian kept pointing to the picture and saying "meow." (Julian is at that stage when he makes the sound an animal makes to signify the animal. "Woof woof" is what he says when he sees a dog and "MEOW" is what he says when he sees, or even thinks, about a cat.) It took me a few minutes, but then I asked Julian if he wanted to see more cats. He said yes. So I went to catster and checked out some cats. Oh. My. I had no idea my child loved cats this much. He practically jumped out of my arms to tackle the computer screen and he kept repeating the mantra "meow, meow, meow." Then I decided, for the sake of my computer, that we should, perhaps, log off of catster and find a less electronic means of viewing cats. Luckily, we own an 11"x 17" coffee table book on cats which has full page glossy photos of cats. Julian was in heaven.
Email Post

Anonymous said…
Ellie and Lucy have the same mutual adoration society going on that Julian and Simon apparently do. Ellie's not shown much interest in muckling on to cats other than Lucy - thank the gods, because as we know not all of them are as patient with being molested by toddlers.

Ellie also does the mee-ow thing when she sees kitties, and says "dak!" at her yellow rubber ducks, or yellow ducks in a picture book, but not at her red rubber duck, or at any real ducks.
1:12 AM, June 04, 2006

Gina said…
Those are great shots! Liam loves our kitties too... They tolerate him slightly but mostly take off when he takes notice of them or tries to "pet" them.

karrie said…
Max also adores cats. We bought him a laminated placemat that has small pictures of various breeds, and he drives me nuts asking "What color that kittycat?" "What kind kittycat?"