It Was Bound To Happen, Eventually 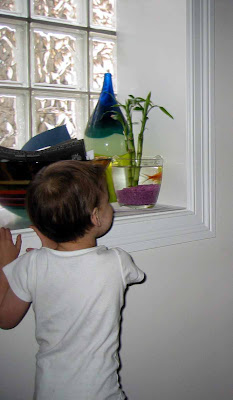 Grace and Julie were visiting with us today. We were having a somewhat more stressful than usual playdate as Julian is starting to grok ownership and doesn't really like the word share so much anymore (or rather, he has no problem with the word, it's the actual action the word describes with which he has a problem). We went to the park, but Julian asked to come home because he wanted water and I forgot to take a bottle (and the water fountains have not yet been turned on). We tried to have a picnic on the back deck, but Julian decided it was too sunny and windy and insisted we come inside. That worked for awhile, but eventually both kids wanted blueberries and so I said we had to sit at a table for blueberries. So there the kids were, at the dinner table, eating blueberries, when Julian looked up and asked, "Where's my fish?"

I said, "Oh, it is right over there," but as I looked over at the fishbowl, I saw that it was empty.

Fish just don't disappear, do they?

Of course, I really couldn't remember the last time I had seen he fish. I assumed that Fred had encountered the fish floating belly up and had disposed of it before he went to work. (I say fish, singular, because the smaller of the two fishes we originally acquired had already died. We think the bigger one ate all the food and let him starve). I told Julian that Fred may know where the fish was. We called Fred up.

"Fred, you are on speaker phone, Julian has a question for you."

Now, admittedly, it was totally cruel of me to spring this on Fred like that, but I figured if he knew the fish was dead, he already had a plan for talking about the lack of a fish to our toddler boy. However, as Fred obviously had no idea what I was talking about, I turned off the speaker phone and said, "The fish isn't in his bowl."

Now, my next suspicion was Simon. Fred had the same thought. We both thought that, perhaps, the fish was now inside Simon's stomach. This would explain why the fish was nowhere to be----

And I screamed. Yes, with two toddlers eating blueberries and another mom as my witness, I screamed when I looked over at the floor and saw the fish carcass on the floor. Which of course, caused Julian to cry because even though he couldn't see the fish, he knew something was going very wrong. He wanted to know where his goldfish was and why he couldn't see it.

I told him the fish ran away, but we could get another fish. He screamed that he wanted that fish. I told him the fish went to visit his Shamai and Shapai, just as Julian sometimes visits his Shamai and Shapai. I told him the fish would come home, just as Julian comes home (and, yes, like many a parent before me, I was planning to head over to Petco to get Goldie 2.0 and a bigger bowl, if that is what it would take to keep the lie going). Julian calmed down and asked if he drove a car to get there. I said yes. I am not sure he believes me entirely, but he seemed willing to play along because he is two and he can't think of an alternative. Julie was cleaning up the evidence while I spun my tales of goldfish family reunions, so it wasn't as if there is proof that what I was telling Julian wasn't true.

After Julie and Grace left and Julian went down for his nap, I called Fred back. While we both had initially suspected Simon, I think this is unlikely as he spent the four hours previous to our Case of the Missing Fish locked in our bedroom (Grace is allergic to cats, especially when she rubs her face against them, as she is wont to do. When she is older and can control her love, we may be able to let them hang out in the same room) and Julie told me the fish seemed intact. I am going to rule this death as an accidental suicide.

What do you think? 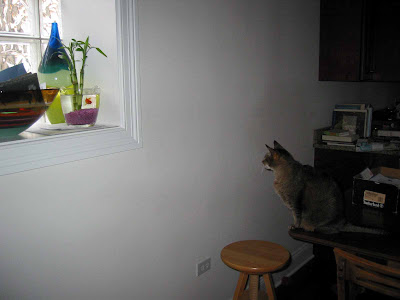 Judy said…
Well, Simon does appear somewhat guilty, or at least wanting to be guilty.

I had a similar experience once, though, with a fish who kept jumping out of his tank, and so I think that's the likely explanation. (This fish, btw, kept coming back to life when we would put him back in the water. His name - I thought you might apprceiate this - was Fred.)

And I think I would have handled the explanation just as you did. Guthrie currently is obsessed with wanting a pet turtle - darned Franklin books - and I am hesitant to get one for fear of having to explain that the turtle "ran away" to the ocean.
5:40 PM, May 07, 2007

Anonymous said…
When my kids were little like Julian, I did the running away or fast forwarding through sad parts in movies. My mother-in-law told me that I need to let them feel loss when they're young because they develop the skills to cope with larger loss that will inevitably come in life. She was right (as she is about everything in the end), but this has damn near killed me over the years.
5:58 AM, May 08, 2007

D said…
Oh gracious! Good for you being able to think on you feet like that. I'd be stumbling all over myself trying to come up with some excuse!

alimum said…
So we told Julian the fish isn't coming back and he seemed a bit irritated. Not sad, more like, pissed off that we aren't going to have another fish. But it was too stressful having a cat and a fish and, from what people are telling me, this sort of thing happens all the time. I don't want to clean up dead fish more than I have to.
10:34 PM, May 09, 2007