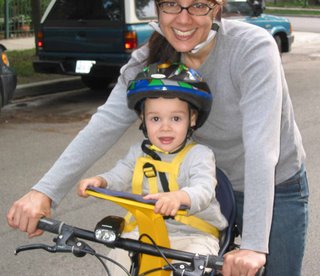 For awhile now, I have been thinking that there had to be a way to take Julian on the bicycle.

I used to ride my bicycle everywhere, back in the day when was not responsible for the care and safe transport of a very small human being who had a desire for movement, but couldn't be depended upon to reach the pedals of his own bike or to follow me.

It is frustrating that almost every trip we take must involve the car, unless we have the time and it is within walking distance, in which case we may or may not enlist the stroller. There have been some beautiful sunny days, days in which our only destination was within three miles from our home, where I have to strap Julian into a car seat.

I was not interested in those trailer tent devices because they seemed better suited to bicycle only paths and they made me a bit nervous when I thought about riding on city streets. The bike carriers which I recalled from my own childhood seemed unsafe and I couldn't imagine Julian would enjoy staring into my back for very long.

So you can imagine my excitement when, a few weeks ago, Joel and Julie showed us the bicycle seat which they had purchased for Grace. It mounts in between the handlebars and the seat. Not only is your child able to watch the world go by and conduct conversations with you, the central location of the seat means that the added weight has less of an impact on one's ability to control the bike. I was speechless. Such a device would change my life. I had to have one. We went home, ordered the seat and received it within seconds of hitting the confirm button. I am not even sure they waited for our credit card company to approve the sale.

Unfortunately, despite such lightning speed on that end, we were poky in getting a helmet for Julian. So today, we had to tear ourselves away from the Netherlands-Portugal game (we saw the goal) and trekked on over to the bicycle store where we each purchased a spiffy new helmet--Julian has been shredding the interior foam of our old helmets, which were hanging off the handlebars of our bikes in our bedroom. This would have annoyed me and spurred me to take action like, say, moving the helmets to a difficult to reach location, but we needed new helmets anyway and I figured Julian was really doing us a favor by making our old ones unwearable, but I digress. The saleswoman was very impressed by Julian's interest in bikes as he pretty much tried out every small bicycle in the store as soon as we got his helmet on his head. If he could really reach the pedals and figure out the movement, this post would probably be about how we walked in to buy a helmet and walked out with another bicycle. But Julian will probably have to wait until next summer for a bicycle all his own. For now, he is strapped to mine.

We got home in time for Fred to watch the last five minutes of the game and then he figured out how to attach seat to the bike. Then we took it out for a test drive. Julian loved it. We rode to Wicker Park, home of what seems to be the best playground in all of Chicago, where Julian played on the slides and met another little boy named Julian, or so I was told. We hadn't brought our keys with us, so someone had to guard the bikes. The ride home was less fun as Julian wasn't thrilled about leaving the slides and he was hungry hence his less than ecstatic demeanor in the pictures. I, on the other hand, can hardly contain my glee. 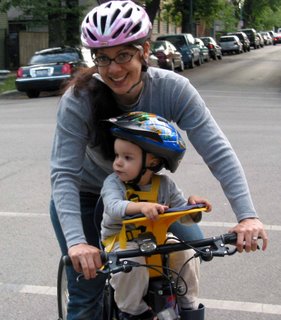 Oh, WeeRide Kangaroo, where have you been all this time and why are you not mentioned on every mother's blog? Why have the other mothers at school, Kindermusik and Gymboree not told me of your existence (or, to put it in more exact terms, why do all those other mothers not know of your existence?) I want to shout your name from the rooftops for all environmentally conscious parents to hear.

So, Joel and Julie deserve a gigantic thank you. And since Grace's birthday is coming up, feel free to send a gift.
Email Post

karrie said…
That is a really cool seat! My husband bought a bike trailer and the idea of him careening around Boston streets with our son in tow makes me extremely nervous. I've played the "crazy, paranoid mother" card everytime he has tried to take the trailer out for a spin.
6:38 AM, June 26, 2006