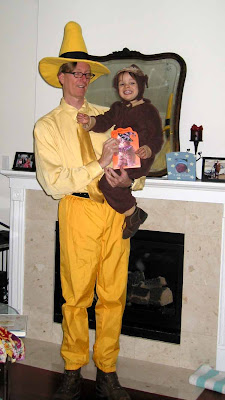 As you know, we tend to get pretty excited about Halloween 'round these parts.

Julian and Fred's costumes took some work. Thankfully, my mom attacked the project of turning our real life monkey into a specific and famous monkey with zeal. She also did a really great job making a yellow hat. Yay Mom!

My costume, on the other hand, was totally thrown together at the last minute.

What I never expected was how instantaneously attached Julian would be to this stuffed Blue dog which I grabbed at the thrift store Saturday morning. The cutest thing was on Sunday morning when Blue's Clues came on, Julian explained to Blue, the stuffed toy, that she was on television. I didn't even realize he liked Blue's Clues all that much, but nothing could contain his excitement at the prospect of watching Blue's Clues with Blue. I guess it is the toddler equivalent of meeting a celebrity.

Anonymous said…
hey I never realized how much my brother resembles man with the yellow hat, he's a dead ringer! plus the adorably cute monkey...and are you Steve? or I guess I should say the new Steve (my kids watched Blues about 10 years ago and he left to be with the band, right?)
3:01 PM, October 31, 2007

alimum said…
I am Steve (the "new" guy is named Joe and wears these brightly colored sweaters). Nickolodeon and Noggin still show the old episodes which are the only ones we watch, when we do.

Judy said…
I couldn't see the pics yesterday, but the costumes are adorable! I am so much more a fan of homemade, creative costumes than store bought ones. Hope the little monkey had a good time.
3:01 PM, November 01, 2007

Anonymous said…
Nice. Remind me to send you ours- I was the mushroom princess. Needless to say I was protected by a couple of dude with plungers and overalls.
2:17 PM, November 09, 2007