Someone asked me after reading the Spandau Ballet post if I subscribed to some special 80s musical artists news feed because, according to this person, I am remarkably well informed on the activities of bands about whom many people my age haven't thought in over twenty years. No, sadly, these stories just seem to find me and, for better or worse, I have this ridiculous memory which could never remember how to determine the length of the hypotenuse but can probably still sing along to every song on Black Celebration and Some Great Reward*. Clearly, I am being stalked by the 80s, kindof like a much less extreme version of the fate afflicting Alex on Ashes to Ashes (well, except that I am not forced to wear Flashdance shirts and can leave whenever I want). How else to explain the following headline on Yahoo when I went to check my email?

Really, Yahoo, this is what you believe should be in the top headlines? Was it really such a slow news day? Isn't there a war or two you could be reporting on?

So I have to assume that, for reasons which we can only guess, the universe wanted me to know that Dave Gahan was hospitalized today.

Maybe the universe wants me (and by extension you) to be thinking about Depeche Mode. Alright, we can do that for a bit.

I'm afraid I don't have anything terribly profound to say about them.

I never saw them in concert. A friend of mine went to one of shows on the Black Celebration tour and complained to me about all the overtly homoerotic imagery he felt they employed (he singled out Martin Gore in particular). I know, sounds completely ridiculous now, but this was 1986 and he was fourteen (though I recall finding it silly of him back then, too). So having never seen them in all these years and watching all these YouTube uploads of live shows, I want to go to their concert. After all, they are on tour right now. Unfortunately, a quick look at their website shows that while they have called this tour The Tour of the Universe, they won't actually be performing in Chicago.** So what universe are they touring where Chicago is flyover country, but Salt Lake City, Utah is not? I know, I am making assumptions here, but I have difficulty imagining the Salt Lake City population being down with homoerotic imagery. 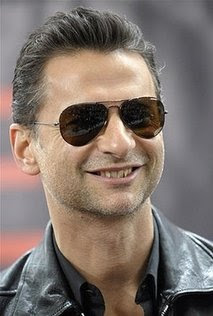 He looks exactly the same as he did in 1986, does this man age? (Yes, I know, he was only 46 in the picture, but he still isn't doing much to dispel the myth that heroin addiction makes one glamorous, provided one gets the hell out in time).

Or maybe the universe just wanted to give me the opportunity to post the following song here. It isn't one of their best, but given the title of this blog and my usual choice in clothing, it's surprising it has never occurred to me to do so before now. What is very odd about this is that I wasn't even wearing a black today.

That universe, what a trickster.

*A friend of mine sent an email correcting me on this (he would have left a comment, but he didn't want me to lose face). He said, " I think the album is Some Great Reward" and I thought, "Uh, yeah, I know that." But then I came back and checked what I had written. I totally thought I had typed Some Great Reward, I edited this a number of times before publication and read Some Great Reward, but now I come back and find that it said Some Strange Reward. So either this is a Freudian slip on my part or someone has hacked into my google account.

**Another email I received (this from a stranger who is not interested in helping me save face) informed me that Depeche Mode will be headlining Lollapalooza this summer. She also said that the reason Dave doesn't age is because he is, in fact, undead. This led me to wish Celebrity Death Match still existed because I would pay good money to see claymation versions of Peter Murphy and Dave Gahan fight it out.