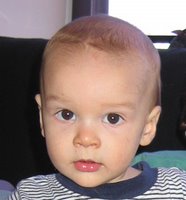 I try to explain to Julian that I am the mayor, the city council, and the chief of police of Babyville. He laughs and declares anarchy. On a good day. On a bad day, he just goes straight for the anarchy without wasting any time on giggles.

Apparently, this is pretty standard for toddlers.

Apparently, the cuteness and the sweetness that 16 month olds can demonstrate are disguises they wear so they may hide their true selves, or it's to get you to let down their guard.

Apparently, boys have poor impulse control and my troubles have only just begun.

Apparently, I have another 4-5 years of this.

Apparently, there is a lot that no one tells you until AFTER you have a child. Because, of course, no one would procreate if they knew about stuff like this in advance.

So, it's another day here in Babyville and disorder continues to reign.
Email Post

Anonymous said…
Do you have a Whole Foods or a Trader Joe's nearby? Because this can often alleviate any problems you may have in a given day or moment. They pump oxygen into these places, and I think they could help you.
12:34 PM, March 19, 2006