The Scarf I Didn't Remember 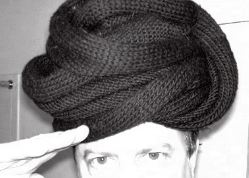 Thank you Dean for sending in the photo and for reminding me of its existence.

How could I have forgotten?

I spent hours, days on this scarf and it was one of the first things I made. How could all those brain cells which stored this information have been offline for so long?

On a related note, someone I knew once asked me to make her an item. I did so. Years later, I saw the item I had made for her in a pile along with a lot of other things she no longer wanted. It was an odd experience because while I had no emotional connection to the item I had made and really didn't care what she did with it (as it was her possession to do with as she liked), I wasn't sure if I should say something ("Hey, isn't that the item you requested I make for you years ago?") or just pretend I hadn't seen it. Of course I understand that people's tastes change and something we desperately want at one time can seem like a waste of space years later. I was surprised she didn't hide the item from me, but then I realized she probably didn't remember where she had acquired the item in question and thought nothing of leavng it out for me to see. She would have been mortified if I had commented on it, so of course, I said nothing. But I won't be making her anything ever again.

It's a strange thing memory. Most people credit themselves with having a great memory, insisting that their version of events is the correct one and deem all versions which disagree with the one they have in their head to be false. This can be difficult when talking about the past with others. It can get really difficult when one has documents (photographs, journal entries, videotape) which contradicts another's memories because instead of letting go, the person in question will oftentimes grasp at the illusion created by their brain. We all want what we believe to be true to be true and reality has no business proving us wrong.
Email Post

purrl said…
Dang, you've got tact, girl. I would have been hopping up and down waggling the offending item in one hand and wildly gesticulating with the other.
3:04 PM, March 21, 2006

I'm more the receiver of things, and certainly haven't done a lot of making of my own.

I have done a lot of purging of late - including items which I had emotional attachments, particularly with items where I associated my relationship with the items to specific people and the value I place on our relationships. I'm not sure I'd characterize things I got rid of as 'wasting space' but rather that I no longer was able to keep them, whether or not I still wanted/liked them. In many cases, the decision to let go was painful - usually because of the value of the item based on my relationship with the person I associated with it.

The things I have given away I have tried to do so so that they go to a place where they continue to be wanted, needed, and cared for. For example, I've let friends and students have first crack at my books, and given specific books to specific people. Similarly, I've passed on clothing, art, and tchotckes to people I think would like them. when these avenues seem exhausted to me, I place them in the 'goodwill' pile.

As a receiver of many handmade items, I have gotten much use from them and their presence reminds me of the maker; however, as a recipient I think it honors the creation and the maker more for me to pass along the item to someone who has more use for it or who has the space in their life for it rather than have it sit (used or unused) with someone who no longer has a place for it in his life.

I'd like to assume the person who asked for your item got a lot of joy, use, and connection to you from the item while she had it. I think this honors your creation, perhaps enough for you to consider making something else for her if she asks you to.
10:41 PM, March 21, 2006

alimum said…
It makes me sad when I see the hand knit items at the thrift store and know that the Salvation Army was probably not where the creator had intended the creation to go. The problem with handknit items is that they seem to live in this limbo between clothing and something else. One can accept that clothing is expendable. But what of the handknit sweater? It functions as clothing, but when we start to examine the amount of time, effort, and love which went into the creation of it, it takes on a value far greater than one we would ascribe to a mere article of clothing. One has the right to treat one's possessions as one sees fit. But one also has the right to limit how much of one's time they will spend creating something for another person (especially when one has a list of people clamoring for knit items and a limited amount of time.) And in the case I described, I think what bothered me more than the person discarding my item was the fact that the person clearly didn't remember that had made the item in question. It would have been one thing if she had said "hey, you made this for me and I can't use it anymore. Is it okay if I give it away to someone?" That would have given me the opportunity to say "no problem. I can totally see how that no longer suits you." But by it just being there and her not saying anything, it felt like she failed to acknowledge the time I put into the item.
5:39 PM, March 22, 2006

Anonymous said…
Very nice! I found a place where you can
make some nice extra cash secret shopping. Just go to the site below
and put in your zip to see what's available in your area.
I made over $900 last month having fun!

Anonymous said…
What Alimum *didn't* say was that Dean couldn't have discarded the item if he'd wanted to-- It's a monstrous weave made of his own living hair.
4:14 PM, March 29, 2006