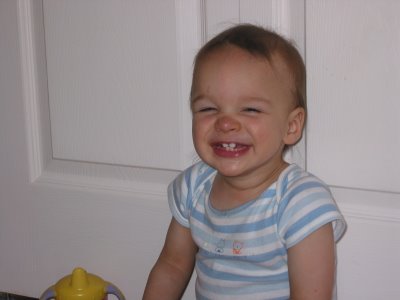 Julian began walking at 10 1/2 months and hasn't sat down since. This really shouldn't be a surprise. Of course I would have a son who is physically active. Of course Fred would have a son who is physically active. Fidgety, jittery me and the boy who spent most of his childhood either running away from disaster or in a body cast (because, sometimes, you just can't outrun disaster.) Ever since Julian touched the oven at 11 months, we have known that our lives would be one very long chase scene, with us playing the role of the boring authoritarian trying to cramp the style of the dashing young hero who just wants to fling his body off of tall objects.

So that's what he does with his body.

Recently, he has been surprising us with what he is doing with his voice. He is talking. More than that, he seems to be going through what people would describe as a language explosion. He seems to understand everything and every single day he surprises us with the words he says to us.

When I told Kristen about this, she suggested I post the rapidly expanding list here. I hesitate to do so, for fear that some may perceive this as bragging. Then again, Sir Talks-A-Lot will soon be able to brag for himself and I would hate to miss my window of opportunity.

All other words and phrases: Car, Bar, Ball, OUTSIDE, Inside, Truck, Nuk, Flowers, Knock knock, TV, Milk, Book, Balloon, Water, Cheese, Toast, Up, Down, Open, Cosed, Cup, No, Noo noo (noodles), Nummy, Bear, Dabu (for this DW doll), All Done, Bump, Hat, Miss You, Bye, Hi, More, Please, Thank you, Walk, Park, Bowl, Toes, Eyes, Ear, Door, Nap, Hug, Slide, Cold, Hot, Shovel, Boy, Sweep, Soap, Chair, Stair, Hot dog, Seuss, Bed, Nurse, Garbage, Poop, Pillow, Socks, Slippery, Shoes, Laundry, Cheerios, Keys, Lock, Uh Oh, Toast, Top, Wow, Hug, Nap, Slippery, Sticky, Naughty, Happy, Me see (for "let me see" when he is looking for something), Yes, Shall we ("yes" as a response to Fred when he asks "shall we?"), Me sleep, Yet yet (said as disagreement when told "not yet"), I poop (said as a joke since it is rare for him to actually have pooped when he says this and he thinks it is hilarious), Oopsie Daisy, Banana, Avocado, Blue (for blueberries), Strawberries, Cherries, Spoon, Yellow, Pink, Buckets, Jump

Now I am sure my mom will read this and say I have forgotten some words that he says when he is with her. I am sure there are words which he has said once or twice which I have missed. That wasn't the point of this exercise. The point is to show that he is talking a blue streak. This, like his physical development, should come as no surprise to anyone who knows me. My mother called me "Motor Mouth" when I was younger and my love affair with the English language has not ended yet. Maybe he will end up like our friend George's brother who just won the Senior Spelling Bee (He said that part of the reason he did it was to see if it was possible to learn the whole dictionary...I can totally see Julian doing this. Heck, I can totally see me doing this. I have 16 years to train.)

So, to recap, Julian is learning to talk. Hooray. Now if only he would learn to sleep (alright, that isn't fair, he sleeps, I can even prove it with pictures. But not nearly as much as he should.) 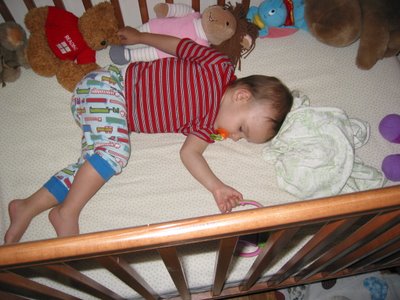 alimum said…
He does say "Valerie"

But we aren't so sure he knows who Valerie is, since he only sees her when she deigns to leave Nebraska.

But he says "Valerie"