How we spent our last day of summer and the first day of school:

We began the morning with breakfast and then some building. Julian wanted me to help him make a semi-truck with his bristle blocks, but that quickly morphed into a demand to create a bus. 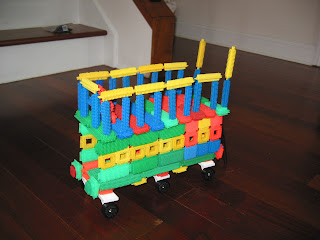 He declared this to be the best thing I ever made for him. 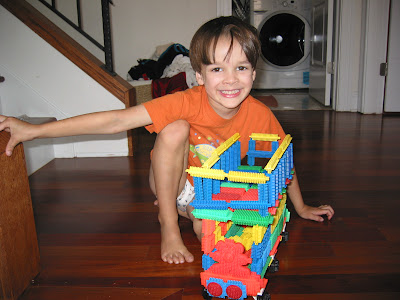 Our plan for the afternoon was to go to the Children's Museum at Navy Pier and I capitulated to Julian's request that we have McDonald's for lunch. That conversation went like this

Julian
And we can go to McDonald's.
Alison
Really? Because I get the feeling you don't really like McDonald's food, that you just like the toy.
Julian
No, I like the food. I like the apple juice and the chicken nuggets and the french fries.
Alison
So you would be happy if you didn't get a toy.
Julian
You always get a toy. Even if you ask them not to give you a toy, you will get a toy.
Alison
(chuckling)Honey, I don't have to buy a Happy Meal. I am pretty sure I can get the food without a toy.
(silence while Julian thinks this over and plays with his bristle blocks)
Julian
Mama, if you ask them not to give me a toy and they give me one anyway, it's okay.

I saw that this was an argument I was unlikely to win. However, I insisted that we bike down to Navy Pier. Julian was opposed to this idea ("we can take a bus"), but couldn't argue with my logic ("I have no money for the bus") and we eventually began our journey. 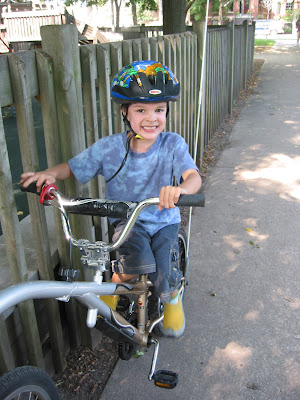 As we biked past Oz Park, Julian announced he didn't want to go to the Children's Museum, he wanted to play at Oz Park instead. I asked if he was sure, he insisted he was. I suggested we could go to the zoo later and he agreed. 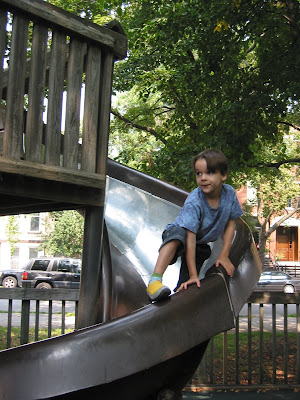 After an hour or so, Julian announced that he was starving and wanted to go to Starbucks. I pointed out that Starbucks doesn't really have food. We negotiated a stop at Starbucks (it involved agreeing not to buy a prepackaged sandwich and making sure they didn't put whipped cream on his drink because he swears it makes the drinks taste yucky).
Afterwards, we went to my mom's house. Julian took a much needed bath. 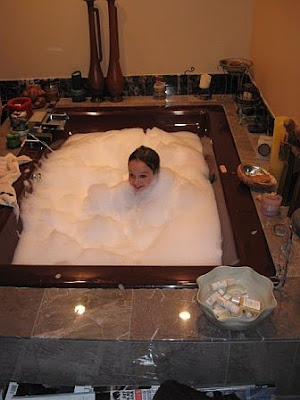 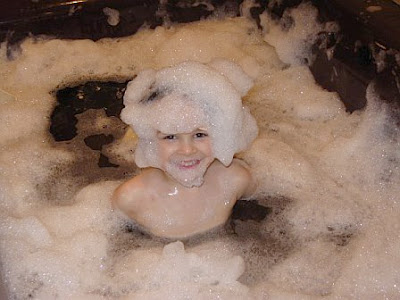 We stayed for dinner and then came home. I worried that since Julian stayed up a bit later last night, he would not wake up, so I set the alarm. This was not necessary. Julian was up early, packing his lunch box and talking about the things he would need for his full day at school (i.e. a sleepy toy and blanket for his nap, his classroom slippers, and lunch). I had a hard time convincing him that even though he was taking lunch to school, he still needed to eat breakfast. He was very anxious to get going. 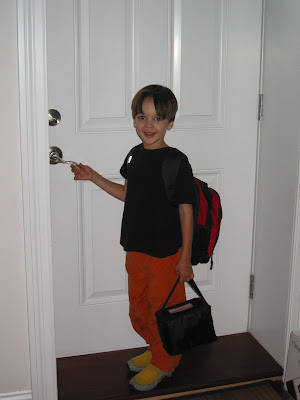 After maneuvering the crazy traffic and parking, we arrived at school. Julian was excited to be back and to see his new locker. 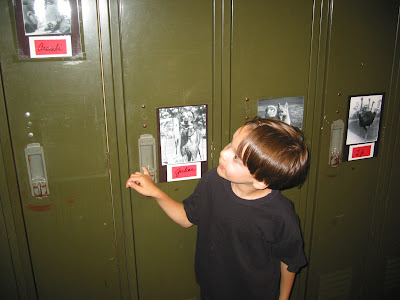 I had to remind him to hug me good-bye before he dashed into the classroom. 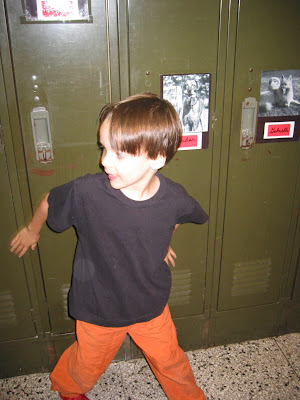 I think I want your mom's bathtub. And is that one of those bike things that attaches to the back of a grown-up bike? I keep thinking of getting one (although I would actually have to get a bike first too).

The bike trailer is great and I highly recommend it if you have a child who is old enough to ride, but not quite old enough to be on their own. But, yeah, a bike of your own is an important part of the equation.

You could always get a tandem bike.