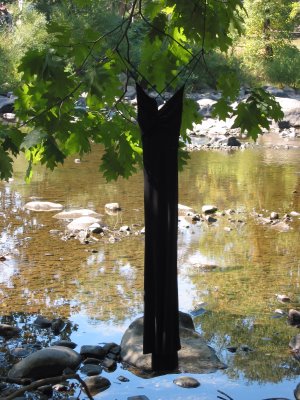 Fleur de Lis Ball last night. I didn't have it in me to forage for glowing ice cubes this year. Maybe it was the 4+ inch heels I was hobbling around in.

I think the amount of fun one has at a formal affair is directly proportional to the amount of time one invests in getting ready for the function.

It took me 2 hours to do my hair (blow dry straight, then hot rollers to make it curly--I was trying to go for a wavy affect, but I misjudged the curling power of the rollers and the staying power conferred by the product I used,) makeup, put on the undergarments (long line bra and SPANX--everyone talks up how great SPANX are, but these began to run the moment I put them on and I am not so sure they made me skinnier, which is the point of spending over $20 on pantyhose, right?) and the dress, then I was tripping in the shoes I originally intended to wear and had to upgrade to the aforementioned 4 1/2 inch platforms (I am, apparently, skinnier than I was when I had the dress altered for length and wore it in Jenny's wedding in October. Smaller butt=longer dress because the fabric is not being held up by the larger posterior. No one ever mentions higher shoes as a potential side effect of weight loss.) I looked great. The dress looked great even if it is the wrong size.

Perhaps it is a sign that I am ready to move on to another sartorial obsession, but I didn't even feel a twinge of desire for anyone else's black dress last night. And it seemed like every woman was wearing a black dress. Perhaps it wasn't a sign of anything. I must admit, I was pretty unimpressed by most of the dresses I saw. The fabrics looked cheap and the silhouettes were unflattering. I think a lot of people assume that formal means long or sparkly or some combination of the two and put very little thought in their appearance beyond that. The best dresses I saw were maternity dresses (one was this red satin dress and another was a knee-length black on black polka dot chiffon with a maribou trimmed hemline) and a sage green satin halter dress. Admittedly, in the sea of black dresses, one has difficulty distinguishing one dress from another. But the lack of fabulous dresses was disappointing because when I was at Marshall Field's after a dentist appointment a few weeks ago, I saw so many formal dresses which made my mouth water, a fair number of which were unadorned and black. So I wonder what people are buying that no one was wearing anything enviable. Do people have so many black tie functions to attend that they run through their better dresses and this event ranks low on the list in terms of seeing and being seen? Perhaps but, in years past I recall seeing far more spectacular evening gowns. Maybe we have evolved beyond conspicuous consumption and people are giving the money they would have spent on clothing to the charity they are supporting. Or maybe they are spending all that money on luxury handbags and shoes.

Beyond the process of getting ready and the anticipation of a night out, I probably had about two hours of fun. Fred wanted to bid on a Vespa scooter, but the silent auction went well beyond its fair market value, so he did not. We both liked the Star Trek Next Generation pinball machine, but where would we put it? It is my opinion that a charity can make the most money in a silent auction if they just offer baskets of alcohol. Seriously, no one ever wonders if they have room for that basket of single malt scotch or if they can buy the basket of wines for hundreds of dollars less at the store.

The live auction was disappointing because the items up for auction were pretty lackluster. Whereas last year they were offering a role in a feature film, this year's big item was Golf with Mike Ditka (an item that seems only slightly more attractive than Hunting with Dick Cheney.) What people really want are the ridiculous items with famous people. Forget playing golf with abusive ex-football coaches. I'm thinking that people will pay big money for an item like "Go Couch Shopping with Tom Cruise" or "Do the Chicken Dance with Condoleeza Rice."

Otherwise, it was pretty much the same as every year. We had to restrain my mother from overbidding on items for Julian, but she still managed to outspend some people on things she doesn't need. One of my cousins was so grossly inappropriate that after five minutes with her, I was ready to call it a night. By the end of the evening I was grumpy and my feet really hurt.
Email Post
Labels: Beauty Fashion

Anonymous said…
What is the Fleur de Lis Ball? It sounds great, though I agree, sofa shopping with Gay Boy would be a lot more exciting than teeing off with Ditka.
6:06 PM, February 26, 2006

Anyway, A, you are goign to function with a bunch of theatre people, are you not? It has been my experience that they are among the most impoverished of the capital-a Artists, so they can't affort nice clothes, and are otherwise notoriously bad dressers. You remember Marti, don't you? Maybe they think that because they are reasonably talented in one artistic enterprise, they get to try out their skills in another. What they don't realize is that there's a reason there's a costume designer, and that's because you can't dress yourself. Also there's the other Artist camp that says that clothes don't matter. so maybe they just have one black dress because they HAVE to and dress schlubby the rest of the time to make some sort of statement about their souls.
I don't know that this is something that should really go into the black dress piece... it's more about what you think of other people than the evolution of your obsession.
10:53 AM, April 12, 2006