What Did We See Through Our Eyes Before We Were Taught How To See? 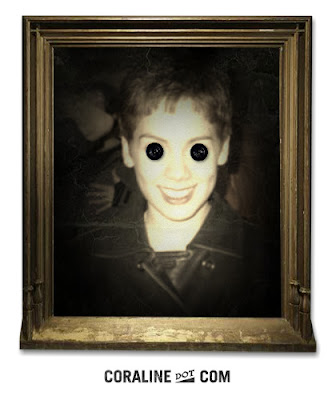 At the Coraline film website, you can upload photos of yourself and your loved ones and button your eyes. Unfortunately, I cannot make a photo which adequately conveys the terror the button eyes instilled in me when I read the book years ago. However, I cannot hold this against the makers of the film as the website is quite lovely and appropriately creepy.

Rachael posted this link on Facebook. As this is the second time this week I am giving props to Rachael, I figure I should tell you a bit about her and how totally creepy, yet absolutely unsurprising it is that she should turn out to be a Neil Gaiman fan.

Rachael and I were best friends when we were five years old. She moved away when we were six and while we tried to stay in touch, we lost touch as the years passed. Then we found one another again during orientation week our freshman year of college (considering that we lived in different parts of the country, I skipped a grade, and there were only something like 1300 students at our college it is a gigantic coincidence that we ended up at the same school at the same time). We did not become best friends again as I was socially awkward and didn't know what to make of it all--keep in mind, both our mothers talked about me crying when we said goodbye as children and, I worried that she had been important to me than I had been to her, so I tried to be cool, but probably still came across as needy whereas she struck me as someone who was very comfortable in her skin (something which I was not) and already settled in the college environment (something which I never quite managed). So anyway, we were friends, but not close friends while at school. From my perspective, our lives seemed to follow parallel trajectories, each of us bouncing between the history and theatre departments until, finally, I ended up writing a history thesis and she choreographed a show (which was really good--it was an interpretation of fairy tales) and wrote a theatre thesis. Then we graduated and lost touch again. Now we are reunited via Facebook and she consistently cracks me up with the links she posts. And, in some ways, it still seems like our lives have followed similar paths, though I acknowledge that many of the things we have in common are not entirely unexpected and tenuous at best--sure, we both were interested in theatre, history, and dance, but we weren't interested in the same areas of study and while we both founded dance companies, that doesn't mean we are artistically creating similar work. I could just be imagining things or making more out of this than there is. However, it is strange that we have, on the surface, so many similar interests (for example, one of us didn't end up an accountant). It makes me wonder what children know about themselves and why they gravitate to some people and not to others. Maybe this affinity for similar things is why we became friends thirty-one years ago. Maybe there is some supernatural force throwing us together and we are meant to join forces to save the planet (hey, don't tell me that us ending up at the same college is any less weird than the Doctor parking the Tardis down the street from Donna's car). Or maybe we should just chalk it up to Montessori school turning us into artists.
Email Post
Labels: Books High Weirdness Movies Passage of Time Youth