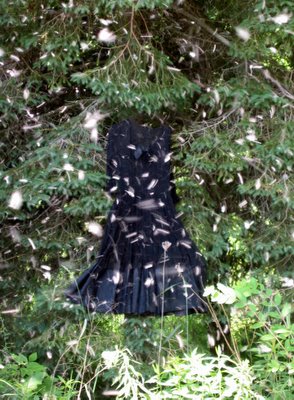 Having a child makes one reexamine one's own life and one's own traits. This is partially a result of watching the child develop, but it is also due to the people in your own life telling you stories about your past. This leads to strange revelations about one's self.

For example, while I knew that I began walking at around the 9-10 month mark, it didn't seem so significant until Julian began to walk at around 10 months. Suddenly I became aware not only of what gifts he may have inherited from me, but also that I may have been gifted in the first place. I never considered myself to be physically advanced or particularly active (my memories of childhood being ones spent reading and playing with Barbies by myself.) However, as I watch Julian, I am reminded of all the jumping off the speakers onto the bean bag that I used to do, how I couldn't watch television without doing cartwheels and trying to do the splits, how I always fidget. I always thought I was physically inept because I wasn't as flexible as I wanted to be and wasn't as talented as the other girls in gymnastics, but now I wonder if I was perhaps looking at the wrong things when I was assessing my physical skills.

Another thing my parents have mentioned is my puzzle solving ability. Apparently, I was able to put puzzles together at a very early age. While this surprises me when I see the difficulty level of the puzzles and how long it takes me to do them now, I do remember putting them together as a child. This just confirms something of which I have gradually become aware over the years: I am very good at seeing patterns. I seek to find patterns, even where none seemingly exist. I remember many years ago developing a crush on Michael Kinsley (this was before we all had Jon Stewart to swoon over) because he wrote a couple of articles which appealed to my pattern seeking sensibilities. (I can't find them online or else I would link you to them as they are quite lovely pieces of writing.) In William Gibson's book Pattern Recognition, the character Cayce Pollard has a serious allergic reaction to brand names and this allergy has made her a "cool hunter" (i.e. she is able to determine how big a hit a logo/company/trend will be based on the severity of her reaction to it.) Although I do not have such abilities, as I read the book I felt an affinity to her trying to find meaning and patterns in the seemingly random.

We had school today. At one point, Julian was working with these wooden pegs, standing them up in precut slots, and he arranged them in an order of sorts (red, yellow, blue, red, yellow, blue.) I said something like, "it's color coordinated." Martha, Julian's teacher, said "that's a big thing for you, color coordination." I said something about how clashing colors make my brain hurt. Which is perhaps overstating it a bit; clashing colors and things which could be organized by color/pattern, but are not annoy me and I find visual incongruity troubling, especially if it is subtle, but I am overstating it if I say I feel actually pain when confronted by such things. However, after I spoke, I began to wonder if this might be part of what has caused my love for the color black, which has resulted in my closet overflowing with black clothing. Perhaps I am attracted to black because, even when one's blacks don't match, black cannot clash with itself and it is very hard (though not impossible) for black to clash with another color. By embracing black in my wardrobe, I have limited the amount of visual dissonance in my world.

Of course, I may be overdramatizing things and trying to find an explanation where none is necessary (the problem with having a strong sense of pattern is that the brain attempts to find patterns where none exist.) Maybe I just like the color black.
Email Post
Labels: Fashion

Anonymous said…
there's an interesting bit in one of the books i'm reading... you may see traces of it in the notes on my current book project that I sent you. Anyway, the book is The Quark and the Jaguar by Murray Gell-Mann. Its subtitle has something to do with simplicity (the quark) and complexity (the jaguar as complex adaptive system). I'm reading it because one of walter's nerd friends loaned it to me so i could learn basic string theory. You may find it interesting.
Anyway, my love for black came from a similar desire to avoid having to match, although i would say that it was more from laziness and a longing for simplicity than a physical aversion to clashing. In fact, i've always loved clashing simply because it made other people uncomfortable. You missed my red men's suit pants, blue vinyl pants, gold leather jacket, and other monstrosities that gave me some measure of on campus fame while in undergrad. I think you would have hated them. you would have hated them very much.
10:43 AM, April 12, 2006