The Fabric of Our Lives 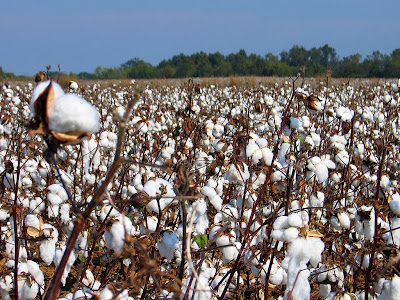 A Tesco spokesperson told SmartPlanet: "We realise that child labour is a complex issue with many causes, which we acknowledge are hard to effect individually. However, the use of organised and forced child labour is completely unacceptable and leads us to conclude that while these practices persist in Uzbekistan, we cannot support the use of cotton from Uzbekistan in our clothing."

One of the low points on our recent Christmas vacation was an argument my dad, my brother, and I had regarding corporate responsibility. My mom was driving the minivan and Fred, Julian, and I were stuck in the back. My brother (in part to needle my dad) took the "all corporations our evil" position while my dad (in part to needle my brother) took the "we must leave these things up to the market" position, while I, stuck in the way back of the minivan where no one could hear me, had a temper tantrum so that I could get a word in edgewise. Then, after we had the obligatory discussion about how inappropriate my tantrum was and aren't I getting a bit old for that sort of behavior, I delivered an impassioned monologue wherein I discussed the complexities involved when using phrases like "corporate responsibility" because different people want different things, so what one group may consider to be a highly responsible act which helps society, others may consider to be exploitative and damaging to society. At which point, we arrived at my brother's house and the subject changed to what we planned to do for the rest of the evening. Later on, both my dad and brother said they agreed with me and were just taking a slightly more extreme position for the sake of argument.

I was reminded of this incident when I heard the news today that Tesco was boycotting all cotton from Uzbekistan.

I am aware that this decision on Tesco's part may well lead to higher priced goods in their stores and it is easy for me to say that this is a worthy trade off considering I live in America and am not affected (at least not directly). While concern for the lives and rights of the people who harvest the cotton and make the clothing is all well and good, especially if we are talking about children and forced labor, this may resulti n higher priced goods and there are people who live in poverty who can't afford to pay extra for a t-shirt. However, taking that into consideration, I think this is a good thing and I wish American retailers would follow suit. Maybe Tesco's decision, as well as reports like this, will serve as inspiration. Because I would be even more excited about this story if it were Wal-Mart banning products which relied on child labor from their stores (I say that and I think it could never happen. But then, I google some more and find out that it already has happened, albeit to a much smaller degree. Still, it is progress.)

Note: I found the photo on this website. Go visit to see more beautiful pictures.
Email Post
Labels: Do Something