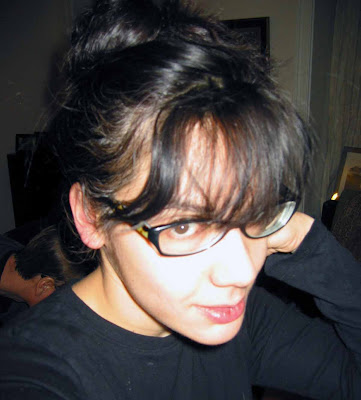 This is what thirty-six looks like (disclaimer: that's with no makeup and I have a slight head cold,).

It is already 2:30 and I have not yet had any pie today. Worse still, I am beginning to suspect that I will not, in fact, have any pie today at all.

The problem with National Pie Day is that we do not yet have the technology to teleport pies into people's homes so that the pie is available for them to eat. No, we live in a world where people are expected to procure their own pies in advance of National Pie Day, which means that people must make plans in advance. Because few people have the luxury to just get up and pie a buy when the urge strikes them; even if you have the time and freedom to do so, it is the dead of winter so it is unlikely that you will have the inclination to brave the elements unless you really have to. Of course, one could always bake a pie, but that means one must have the necessary ingredients, which brings us back to the prior planning and inclination.

But you would think that it being both National Pie Day and my birthday that someone would have randomly given me a pie (even if only a slapstick pie in the face). Sadly, no pies have been sent in my direction. Other than that, the birthday has been alright. This morning, Julian tried to convince me that since it was my birthday, a special day, he should get to stay home from school. This was not a compelling or successful argument. Had he suggested that we get some pie, he may have had more luck.

Maria posted this in her birthday greetings. I think it describes me quite well (though, oddly enough, pie, or lack of it, is never mentioned).
Email Post
Labels: High Weirdness Shameless Self-Promotion

Judy said…
Happy Birthday to you!!!

36 looks pretty great to me. Please, please tell me though that you cover your gray? Is that natural? Because if I didn't color I would have sooooo much gray, and I couldn't see a one on you.

There's your pi for the day.

Not what you wanted? Sorry. :(

I have been going gray since my teens, so if I didn't dye my hair, I would have Bride of Frankenstein streaks.

BTW, Make EVERY day a Pie Day! That's what I strive for anyway.