I have always been a fan of opaque black tights. They go with everything, they hide the fact that one hasn't shaved one's legs, and they make a person look taller and thinner. The perfect accessory, in my opinion. Unfortunately, black tights have a nasty tendency to run.
About a decade ago, I took a few pairs of ruined tights and cut them into ribbons. Then I sewed the ribbons end to end. Then I wound it into a ball and began knitting test swatches. The fabric this created was very heavy and stretchy. I couldn't quite imagine what I could make from this yarn. A bathing suit, maybe, but the fabric was way too thick and warm for an item one might intend to wear in the summertime. For a while, I toyed with the idea of knitting stockings from the yarn and taking a series of photos to document the process, but despite the internal logic of this plan, the yarn itself is not terribly pliable, so it would make a very uncomfortable stocking, and it seemed like a waste to knit even one sock just for an art project which would languish on my hard drive with the rest of them. So the ball of yarn languished with the rest of my stash, waiting for inspiration to deliver it from obscurity. 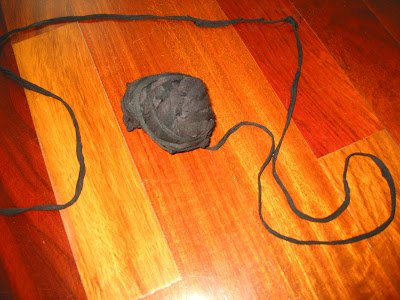 Last week, we bought a new computer and an iPod Touch. I am still learning what can be done with this handheld device, I haven't even downloaded any apps yet, but I am already worrying about how it will fare in my purse.
I need something to protect my new toy from my keys and my cell phone. The internet is filled with patterns for hand knit iPod cozies and holders.
After trying a lace weight cashmere on 0 needles (which was beautiful), I decided I needed yarn that would would be thick enough to protect the device and would not be so pretty as to make me concerned about what my keys mights do to fabric. I mean, it is kindof crazy to make a protective sock for an iPod only to become concerned about the fate of the sock. And then, I had my peanut butter and chocolate moment. 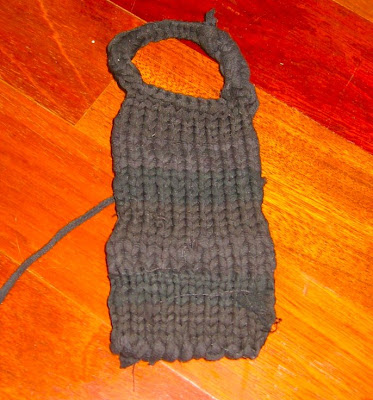 I knit this in a couple of hours on number 10.5 needles. I decided it needed a handle because it would be easier to fish it out of my purse.
Email Post
Labels: Knitting