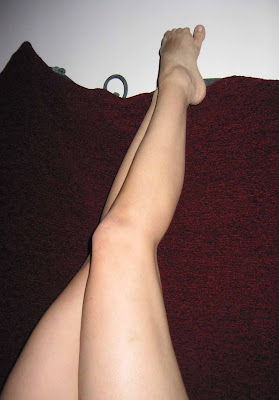 A few years ago, my friend Heather (who was working in the School of the Art Institute's Development Office at the time) saw a guy walking down Michigan Avenue completely naked, talking on a cell phone. She overheard some people say that he was probably some guy from "that art school around the corner." When she got back to the office, everyone agreed that it probably wasn't one of their students because Heather hadn't seen anyone documenting this man's art and the reactions of passersby to his art. You see, someone else taking pictures and/or videotaping you makes you an artist. Otherwise, you are just another crazy exhibitionist.

At the time, I thought it would have been an interesting piece of performance art. We have blurred the lines between public and private to such a degree in our society. Would showing one's testicles be a greater act of exposure than having a very loud argument on a cell phone while shopping at Whole Foods? Would I be more uncomfortable seeing a stranger's penis than I am overhearing him begging his ex to take him back? Why do we feel the need to draw a line at physical nudity when we already display so much of ourselves for everyone to see?

So you can imagine how excited I was to read about a recent protest in Moscow. Yes, it is wonderful to see people taking the old saying Make Love, Not War literally.

I think you have to be a serious exhibitionist to do something like this, and, it seems, the police and various onlookers were unaware of what the protesters were protesting against (the article says they wisely did not name names, which may be why these protesters lived to protest another day). So maybe it was unsuccessful as political protests go, but it totally rocks as performance art.

I find myself wondering how such a thing would play here. How long would it take before the car was pulled over and the couple arrested? Would the story be aired on the local news affiliate and cable news networks? Would the sight of people having sex on the top of a moving car shock people into thinking or would it just enrage them? Or would we just notice it and then shrug it off as none of our business, the way we do with so many things we encounter today in urban life.

I must admit, if I saw this driving down the street I would probably not realize it was a political protest and I would have the same reaction I used to have when some of my fellow students got naked at Renn Fayre: I would avert my eyes. And then, of course, I would rush right home to blog about it and regret that I do not own a camera phone.

Oh, in case you were wondering, those are my legs.
Email Post
Labels: blogging Culture High Weirdness

Anonymous said…
Wow. Double wow. I'm at a loss for words, and laughing at the same time. What I'd like to say is something in between "wow, wish they had protests like that around here..." and "what group do they belong to, and how do I sign up?"

Are we sure it was a protest, or just a really cheap romantic tour of Moscow? ;)

I agree with you; it makes me feel uncomfortable to be a captive audience to someone else's private life. If someone is going to bare it all, they might as well do it literally, huh?

Anonymous said…
Of course I was wondering! Great legs!

Anonymous said…
See, that's what blogs are missing. Teasing pictures of naked appendages. God, why doesn't anyone wise up to this?
8:37 AM, April 28, 2007