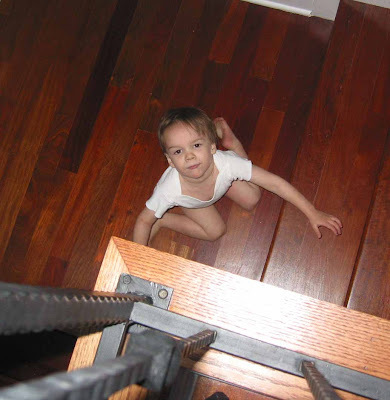 This is the explanation Julian often offers when he doesn't want to feels he is unable to do something. We tell him he will grow big and he refuses to believe us.

As my profile indicates, I think I am a lot taller than I am. Or rather, I believe I should be taller than I am. You see, as a child, I was on the tall side (not abnormally so, but definitely in the upper percentiles of the growth charts). I shot up fast and was always one of the taller girls in class, but when I was around 12, I stopped while everyone else continued to grow. I am only 5'3" (on a good day, after doing an hour of Pilates) and while I know that is a fine height and nothing to be ashamed of, deep down, I feel my height to be a cruel trick played upon me by fate.

Years ago, some guy who was trying to date Maria (who is also vertically challenged though you might never know as she calls 3" heels "walking shoes") once asked us why we, who were both short girls, only looked at guys who were over six feet tall. She told him that it was because she wanted to give her future children a fighting chance at height. Although I never would have put it in those terms, I will freely admit that Fred's height (6'1") is one of the traits I hope Julian has inherited.

So you can imagine how excited I was when I found the height predictor on babycenter. Finally, a completely non-scientific means of determining how tall my son will be. What is the word on Julian? 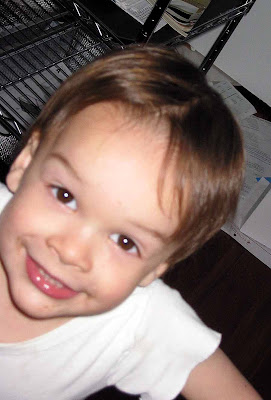 Wait! Not so fast! I have my baby book and I can punch those numbers in. Let's just see how accurate it would have been for me.

Your daughter will likely be 5 feet, 6 inches tall at age 18.

So, um yeah, it is important to note the +/- bit of the predictor.
Email Post
Labels: Beauty memes and tests Pictures Youth

Judy said…
Too funny - I was that girl too. In 5th grade, I was the tallest girl in my grade, and then ... I'm 5'4" now, exactly average (I think). I like my height, now - really tall women tend to look a little silly in high heels, and I like to wear heels - but have felt the same sense of "I got screwed" at times.

According to the predictor, Guthrie will be 5'11", like his father. Who knows, though - I have lots of very tall people in my family (my dad was 6'4", and I have a cousing who is a foot taller than that).

My first husband was almost exactly as short as me, and had a complex about it, made worse by the fact that he didn't qualify for the job he wanted in the Army because of his (lack of) height.

Anonymous said…
Paul grew exactly as you did - as tall or taller than all the boys his age until 13 - when he stopped just over 5'8"... and they kept going, right past him. To make matters worse, his Dad is 6' - so he had high hopes of reaching that. Our eldest (18) is 5'11". Paul varies between pride that he passed on the gene, and pissedoffness that he didn't get the benefit himself, lol.