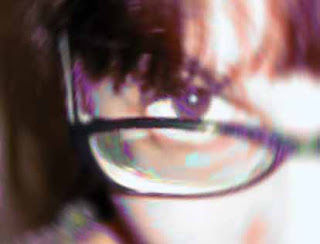 The problem with planning to write a novel set in a not-too-distant, dystopia is that it becomes far too easy for one, if one is so inclined, to see evidence that the dystopia is already here and, perhaps, this work might not be as fictional as one would like to believe. No wonder Phillip K. Dick suffered mental problems.

A couple of weeks ago, I was reading an article in the newspaper about Irena Sendler and I couldn't even imagine what those parents must have felt, giving over their babies, knowing that their own fates were sealed. Then I imagined being in that position, today. Of course, my first thought was, "that could never happen here," but then I began to think about the series of events which could happen to make it possible for someone like me to be sent to a concentration camp. I found it shockingly easy.

I wrote out pages and pages of notes that day as Julian watched The Backyardigans. I was excited.
Total fiction, I thought. I will have to do a lot of research to figure out a way to make this believable, I thought. No one would ever believe that all this could happen in a mere couple of years because, well, that sort of infrastructure and manpower takes time to get into place. I mean, even the Nazis with all their German attention to detail took longer than that. And the American people wouldn't stand for it.

And, because I had so much ground to cover creating the future in which my story takes place, I figured I would write this from my perspective, as if this were actually happening to me, and then clean it up (change the character, make her less me and more some imaginary woman) in later drafts. So I wrote a whole lot of notes about how this future would affect me specifically and imaginary scenes. I was questioned by government employees who suggested that my past experiences were evidence of pro-terrorist leanings (yes, I imagined them telling me that all my pro-Israeli statements were "merely designed to throw people off" and asking if I "studied Japanese history in the hopes of meeting up with members of Aum Shinrikyuo and learning techniques from them"). I had my parents visiting relatives in Toronto and out of harm's way. I had my brother go underground. I couldn't even begin to think of what would happen to members of my extended family. I wondered who of my friends would help protect me and who would be in need of protection. I worried what would happen to Julian and wondered if my Indian heritage would be held against him. I imagined tearful conversations with my in laws and my fear that they would be targeted because of their contact with me. And I believed that all of this imagining was good because once I actually started writing, the story would just unfold. I would get to 50,000 words by the middle of November. Heck, I could already imagine my interview with Terry Gross.

Then I started to do research and found that, at least according to people with websites, a lot of this is already underway. There are some resolutions currently in committee to end birthright citizenship. I received an email from someone detailing why Muslims could not be loyal to the United States (lots of garbage which can be boiled down to the notion that you can't be both loyal to Allah and the flag. Somehow, however, the same people writing this garbage see no potential conflict of interest among those loyal to Jesus). There may or may not be concentration camps already built and maintained in many states. I remembered what happened after the last attacks, how racial profiling oftentimes extends far beyond the race being profiled. I remembered what happened to those who spoke out against the administration. I read NSPD 51.

Suddenly it didn't seem quite so fictional after all. Or at least, it seemed like people have already been imagining this world for me. Maybe our present day world isn't so safe and secure after all (I mean, look at what is happening to the dollar). I started to make bargains, in my head, like, "would we get to keep our house if I did what they told me to do?" and "maybe Julian could go live with Tracy in San Francisco. They wouldn't look for him there, would they?" The idea of losing my entire life, of losing my possessions and friends, simply because of my ethnic background was unacceptable and impossible. Surely someone would stop this from happening. We have elections every four years, surely this wouldn't last forever. And then I would think, "this is what people experienced in Germany in the 1930s, except it was real, not a writing exercise or the result of an overactive imagination" and then I would think, "in 1933, when Hitler first came to power, could anyone have foreseen the Holocaust? Wouldn't those people have been making the same sorts of bargains, thinking that if they just went along with the government, they could maintain enough normalcy and, surely, this unpleasantness would blow over?" Which is not to suggest that I can even imagine what the people who lived through the Holocaust actually experienced, just that I began to wonder if I would be looking back at myself in 2007 and wondering why I did not get out when I still could.

So I am not going to write that novel now. Or maybe ever. I will try to write something fluffy and sellable (because it seems that the chick lit genre will sustain all manner of poorly written work so long as the right shoes are referenced). I clearly do not have the stomach or the strength to write anything more substantial. Ignorance may not be bliss, but avoidance at least makes it possible for me to get through the day. Because the truth is that, if this is my future, there is nothing I can do to stop it.

George Orwell had the good sense to set Nineteen Eighty-Four a quarter century into his future.
Email Post
Labels: Politics The Day and The Aftermath writer's block

Anonymous said…
I tend to lean towards that type of fiction, but since having kids, I haven't been able to write it.

Judy said…
Aren't you supposed to be helping save the world, not showing us what a scary place it can be?

Fluff is good. Chick lit sells. (So does the other stuff, as I'm sure you know.)

I just don't get time to read much fiction anymore, but when I do, or when I go for another form of entertainment - TV, movies - I lean toward fluff these days. I want to be entertained, I want escapism, not a reminder of what is going on out there and all I can't do about it.
8:24 PM, November 06, 2007

Kind of Crunchy Mama said…
Naomi Wolf has written something along these lines called "The End of America". It's more political commentary than fiction though.
8:50 AM, November 08, 2007

Anonymous said…
Well, if you do ever want to write that novel, Pakistan's state of emergency could give you some ideas as to how that would come off. The beating will of course be televised.

If it makes you feel better, my NaNoWriMo novel this year is not my post global climate shift dystopia for the same reason.
11:09 AM, November 13, 2007