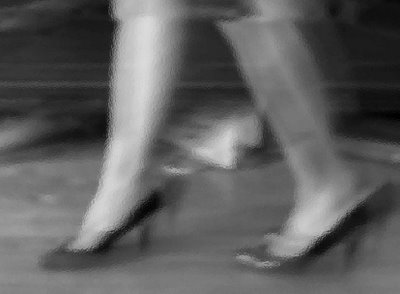 Over the course of any given day I expect myself to:
The last one often feels to be the most important. There can be a day when the only walking I do is from my front door to my car, from the car to the door of my destination, and back again , when I am unshowered and wearing the clothes in which I slept, and do absolutely no writing or knitting, but still feel the day was productive by virtue of the fact that I left the house. Then there can be a day like today, a day where I shower, put on a dress, post to two of my blogs (alas, no knitting occurred), and still end up feeling the day was a waste because I never left the house (alright, I didn't exercise either.)

I am exhausted all the time. The growing sense of dislocation I have been feeling due to events in my life manifesting itself physically only further increased my stress levels. Of course I am stressed, I am the mother of a toddler. Yet I find it hard to relax when I do have periods of down time. I use the hours of his naps to write and/or procrastinate on the internet. My mother babysits a couple of hours 3-4 days a week, but that is when I can get to the gym and get some errands done. I can't sleep at night because that is my time to read or write (though in truth, I have been doing neither lately. I have been wasting my time doing sudoku puzzles.) Even on a day like today, a day when I had another person here to carry some of the childcare duties (and, to be entirely truthful, I tend to foist as much as I can onto Fred so he ends up doing much more than I do on the weekends, at least in terms of taking care of Julian), I felt guilty for sleeping in while Fred made breakfast and, during the day, even when I was doing nothing, I had to be doing something (I did evil sudoku puzzles-instead of knitting-while watching television and, during the commercials, I packed a couple of boxes). I know that scientists believe that doing nothing is not the best way to recharge one's batteries, that there is value in activity when it comes to rejuvenation. However, I haven't yet found the way to relax which doesn't make me feel like I am wasting time.

So today was not a good day. But tomorrow is almost here and who knows what will happen?
Email Post

boodafli said…
yeah. i dig on all that. well. except the need to exercise part. i suck at that. but, you could, you know, knit me some diaper covers. it'd be 2 birds with one stone...knitting, and charity! it's not quite jerry's kids, i'll admit, but i bet you'd feel productive.

Anonymous said…
When mine were little I was just so happy to have a shower and remember my name. By the way your comment kicked my ass on my post.
6:10 AM, August 14, 2006

karrie said…
I can really relate to this post.

Do you ever get an entire day "off"? I've found that I really need one Saturday a month where I'm mostly out of the house and off duty. (I still make breakfast though since my husband is not able to handle the very early shift.)

I usually meet friends for part of the day, but I'm seriously thinking about staying in a nearby hotel some night and just sleeping and reading and not talking to anyone, guilt free.
3:42 PM, August 14, 2006

Anonymous said…
I know EXACTLY how you feel. Getting out of the house is a major accomplishment around here. I waste entirely too much time on the internet too.
8:39 PM, August 14, 2006