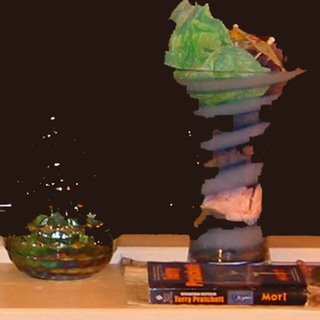 Today, we were packing up some boxes and Fred stumbled upon five vintage cashmere sweaters. Cashmere sweaters which I had thought he accidentally threw away years ago. I had bought them for a couple of dollars apiece with the intention of reselling them at a vintage store, so I had considered the loss to be more annoying than painful. It was a nice surprise. I am not sure what I will do with the sweaters in the long run, but for now, my closet has annexed them (in case you have forgotten, the portion of my brain which is dedicated to these things has the same attitude toward clothing that Bismarck had toward German Princely States). So I was trying (and failing) to pack up some of my sweaters and found myself saying the words which I never believed it possible for a human being to utter, words which, frankly, sound like heresy: "I think I own too many cashmere sweaters."

Clearly the impending move is driving me insane. And people wonder why I have no will to knit right now.

I forgot how much stress moving caused. Or rather, I remembered precisely how much stress moving causes which is why we haven't moved in nine years. The stress, in this case, is compounded by our not having a clear date when we will actually move; we have been "moving in a couple of weeks" for a month now and while we seem a lot closer to moving than we were last week, we haven't yet scheduled a date for the burly men with the big trucks to haul our sofa and china cabinet. We are trying to be proactive, trying to address our growing sense of dislocation and dis-ease by packing up stuff. Nothing of value, nothing we feel we need available to us at all times, nothing we are so attached to we would be sad if we lost it. (Of course all my Neil Gaiman and Salman Rushdie books are still on the shelves, as are my journals and my copy of my thesis. It probably goes without saying that all my clothes seem incapable of leaving my closet).

The problem, for me, is that while I know intellectually that the big items are relatively easy and the small things are what kills you when you move, emotionally, I feel like we have made no progress and that it is just impossible to even imagine we will be able to move. We'll have to live here forever because we keep finding more clothes hidden away in a corner or a box we had thought was empty.

So it is slowly beginning to dawn on me that I may be spreading myself thin. The irresistible force of moving (added to the equally irresistible forces of raising a child and agreeing to understudy a show which opens in the middle of September) is meeting the immovable objects that are my desire to write and develop all the ideas flitting around in my brain. Yes, I want to be witty and profound, and, like The Stone Roses before me, adored. But I have to be realistic about all this and maybe, just maybe, accept that I can't do it all right now. I may have to let my ego step aside for a bit or it may be flattened by the steamroller of current events.
Email Post

Anonymous said…
I honestly don't know how you manage to do all that you do. Like you I have, so many interests, so little time.

Anonymous said…
As someone who has moved at least 6 times in the last 6 years, let me offer some moving advice.

Fall to your knees and pay hommage to the peope who invented hefty garbage bags. There is no need for boxes, folding or packing clothes, towels, linens, etc neatly with these nifty little tools. Clothes in the closet? Cut a hole for the hangers, bam, ready to go. Bedsheets, towels, all hefty friendly. Pillows...hefty. Julian's toys...hefty. The only things I don't recommend putting in are books, and of course the couch.

I detest moving, but it does provide an opportunity to discover little forgotten treasures and declutter, which everyone needs once in a while...though if you're like me you waste more time playing with the "new" toys than packing the old ones.
-Val
11:17 AM, August 30, 2006

Anonymous said…
You still didn't answer my question: where are you guys moving? You don't have to give me an exact addy. Just the 'hood will suffice.
2:03 PM, August 30, 2006

alimum said…
Argh! How did I acquire all this stuff? I know I shop at thrift stores, but how much money have I spent over the years? This is making me think of that episode of Sex and the City where Miranda points out that Carrie has spent $40,000 on shoes (though I have do not own 100 pairs of shoes...I don't know how many shoes I own because, at this point, I think my stuff is hooking up with one another and making more stuff when I turn out the lights, and I am too afraid to go into my closet to count the boxes)

Jackie-sorry, I thought I had replied in a previous posting. Bucktown. You'll be getting the mass email with the details in the next copuple of weeks.
6:25 PM, August 30, 2006