Staring At The Sky 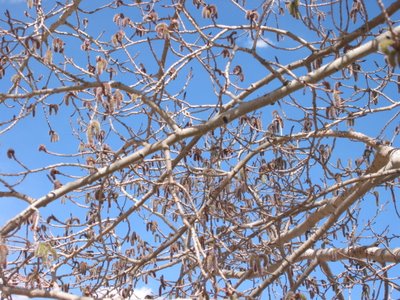 I climbed the mountain so that you wouldn't have to. You can't see the entire world from the top of Everest. The view from there only reminds you how big the world is and how much more there is to see and learn.

- Tenzing Norgay, in a letter to his son.

Outside Magazine is doing a retrospective on Mount Everest. Ten years after the worst climbing season ever, ten years after the Jon Krakaur article which became Into Thin Air, they go back to see how much has changed and what happened this past May (which was the worst season since 1996 in terms of death).

I have very little personal experience with mountain climbing. I will admit, every time I read an article about expeditions, I feel a profound urge to abandon everything and strap on some crampons (even articles about disasters-I know, I am way too susceptible to suggestion). But in terms of practical experience, I only have been on a very high mountain twice in my life.

On our honeymoon, Fred and I took a stargazing tour at Mauna Kea, Hawaii where our guide drove us up from sea level to the observatories (yeah, that was a total shock) before we were brought back to 9,000 feet (where it was cold, but at least we could think straight) to see the stars. It was absolutely fabulous, but also instructive to see how our brains shut down as we got higher up (and keep in mind that Everest's summit is nearly twice as high as Mauna Kea). Of course, we went from sea level to 14,000+ feet so our bodies were unprepared.

A few years before that, we were travelling in the Pacific Northwest and ended up hiking to base camp of Mount Rainier. We hadn't intended to do so when we began our hike, we only had two bottles of water and two power bars (can you say remarkably unprepared?) and I was wearing sneakers and pyjama bottoms. We were just following one of the trails and we looked on the map and saw that we could hike to base camp and, because the map was not drawn to scale (and not at all because we are foolish or anything), we had no idea that it would mean walking through snow for hours. Luckily, we met some other hikers along the way who kept us company (and shared their water). When we reached base camp, it was a total pit and all I could think was "I am so glad I will be going back down where there is running water and warmth." I remind myself that I don't like cold or human waste whenever the urge to summit a mountain strikes me.

In addition to many other topics regarding the lawlessness and carnival that surrounds climbing the world's tallest mountain (Total digression: Interesting thing I heard on NPR this morning: apparently, gravity forces objects to be round and a mountain can only get so high before Earth's gravity pulls it down. Mount Everest is pretty much as tall as a mountain on earth can get) the article touches on the notion that we expect people on Everest to display a level of kindness and concern for others that we do not necessarily display on a day to day basis. We hear about climbers passing other climbers who have stopped on the mountain and we ask, "How come you didn't stop to save a dying man?" Sometimes the climbers say that they thought the person was just resting or was already dead or, in some cases, they didn't even see the person lying there. We, here on the ground who have never been on the mountain, don't want to accept this, we want to believe in the noble climbing tradition of Edmund Hillary and Tenzing Norgay. We don't want to think about how EVERYONE above base camp is suffering from exhaustion, cold, and a lack of oxygen. But, as the article points out, we often don't stop to help the people who may need it when we encounter them in our daily lives; how often do we pass a person stuck on the side of the road? How often do we fail to see the person slumped in the doorway? How many times have you seen someone in tears and looked away? We expect people in a life or death situation to act with a generousity, selflessness, and humanity that we do not always demand of people when they are at sea level. Maybe instead of looking to others on a mountain, we should look inside ourselves.

In one of the other articles in Outside, Mark Jenkins tries to determine what happened to Sue Nott and Karen McNeill, two climbers who were lost in May while climbing Mount Foraker. I was so impressed to read about how these two women tried to encourage other women in climbing and how they did not give up. A friend of Karen McNeil's said of her, "She didn't have many female role models so she lived her own dreams and grew into the role model she wished she had."

I may not have it in me to withstand the cold or lack of air at 27,000 feet, but I hope when I die the same can be said of me.
Email Post