"Did you write that song?" I asked.

Then he said, in a slightly panicked voice, "It's not on my blog."

"Did you just say that it isn't on your blog?" He has never mentioned blogs before. Maybe I just misheard him. He is only two and a half, far too young to be concerned with intellectual property rights. I mean, he is still pretty shaky on concepts like sharing and ownership.

"Do you have a blog?" Not that I thought it was likely, but as this conversation had already taken an unexpectedly surreal turn, anything was possible.

I wanted to ask him if he understood what a blog was, but the show began and Julian lost interest in our conversation because, well, it wasn't nearly as exciting (it was the episode where George tries to stop the cows from eating all the wildflowers.)

So, I guess he knows how I spend my free time. 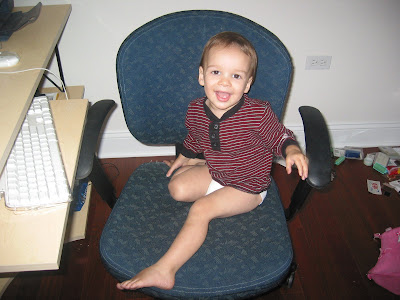 Maybe you should go vote for my blog while I still have one. He already pulls me out of the chair so that he can have quality time at the keyboard. Just imagine what he'll be able to do once he can type more than "iehh/ ssdhjkf=[ 4\ jkld/x0 i ds lfa u\6[q u e9vsk 7 s9."
Email Post
Labels: blogging Curious George Punk Rock Baby TV