Postcards and Poems AKA Fall 2019 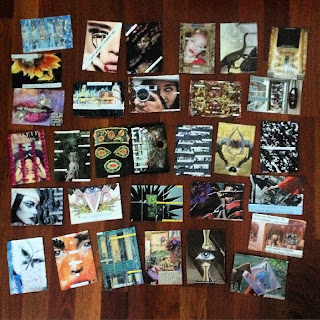 Here we are again, you and I. Another year (and then some) has passed, we have grown older, or rather I have, I should not presume to know what is happening with you, perhaps you are one who ages backwards, in which case a raise a cup of tea to you and salute your good fortune. I, however, have aged since last I was here.

So here we are.

I have written and deleted a bunch of paragraphs in which I ruminate on the nature of time, art, and the various media through which we choose to express ourselves and what we intend to achieve through our choice of media. I keep coming back to the sentence: So here we are. But where is here? What is here? Why is here? You know how if you keep saying a word over and over again the word itself seems absurd, like it seems unbelievable that we have collectively agreed that this collection of sounds and symbols should signify this thing? Yeah, I have now said the word "here" so many times that it has lost all meaning, its become a complete abstraction of itself and that is made all the more complicated by the fact that we are talking about something which was already an abstraction for a website is not a physical place, yet it is a conceptual one. And, ultimately, isn't the phrase "so here we are" simply a transition, a means of getting from point A to point B? So why am I stuck between the two points? What is keeping me from going forward?

Perhaps it would be easier if I just told you why I am here, what I had planned to do with this post. My intention was to engage in a little chit chat and then ease you into my explanations for why it is January and I am only now getting around to posting my poems and postcards from this year's August Postcard Poetry Festival. I was planning on telling you about how I started late this year--we were in England for the first two weeks in August, so I decided to shift the whole thing over to September--and then how once I ignored the concrete, real world deadline, it became easier to ignore all the internal deadlines I had created in my head. I was going to talk about how I thought having ten collages made in advance would put me in a good place to always have art ready to go, but as it turned out, I found myself scrambling to make cards, either worrying that I would never produce another one I liked or producing one I liked so much I didn't want to mail it to a stranger. I really wanted to explain how much harder this seemed this year, both because of my aforementioned artwork issues, but also because I really wanted the poem and postcard to relate to one another and there were days when I just wasn't feeling it. Which brings us back to the whole lack of deadline thing because in previous years, it didn't matter whether I was feeling it or not, I had to write and get that thing out, but this year, I felt I owed it to myself and this project to make it "perfect" and, yes, perfect is in quotes because even as I was doing this I knew that there is no such thing as perfect, perfect is just an idea and it is this idea that glues us in place. Perfect is what keeps us stuck in the transition place.

As it turns out, this post is a perfect illustration for the project it describes. It took me an entire three months of autumn to complete a project that one is intended to be done in the last month of summer, but I did it. I finished, the postcards are in the mail. The rules state I am supposed to wait a month after I send the cards to post the poems, but it also says that once September comes everything is up for grabs. So I think that will probably be another rule I break this year--for what it is worth, I just made the mistake of reading the guidelines for the poems and I suspect I did this all wrong this year, and maybe have been doing it wrong every previous year.

So here we are.